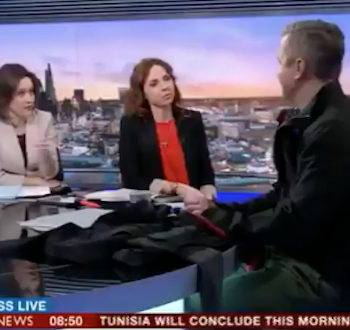 "You don’t have to ride a bike in tight, bright, smelly Lycra," Nick Hussey told the presenters of BBC Business Live yesterday morning. Hussey, the founder and MD of Vulpine clothing, was interviewed in the studio, and was able to drape his brand’s cycle clothing over the studio desk.

He also explained that he was, at times, a MAMIL (middle aged man in Lycra), but that Vulpine allowed cyclists to dress in normal looking togs. Clearly, a researcher had found out that Hussey has worn his base layers for some days.

"Yes, I [smell] tested them on my wife – I’ve worn Merino wool for weeks on end."

How did Hussey land the interview? PR, that’s how.

"A couple of months ago Adam Tranter of Fusion Media put me up for it after a BBC producer tweeted about it. They vetted me, and liked me and the business, and then contacted me," Hussey told BikeBiz.

"This whole new genre of ‘urban cycling clothing’ continues to excite and intrigue mainstream journalists, as most people don’t even know it exists."

Hussey is a great believer in proactive PR, so much so he has now employed a full-time PR officer, Nial Russell.