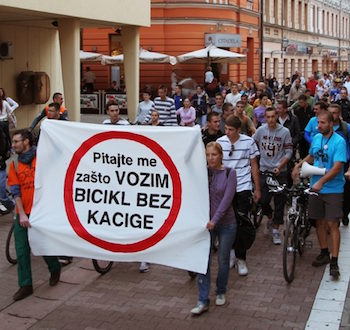 Bosnia and Herzegovina has become the first country in the world to repeal an all-ages cycle helmet compulsion law. The campaign to repeal the law was started six years ago by the Centre for Environment group.

"Citizens can now choose whether or not they want to wear a safety helmet," said the Centre for Environment’s Tihomir Dakic.

Anti-compulsion campaigners say that mandatory cycle helmet laws undermine efforts to increase cycling by making riding a bike seem more dangerous than it is, then putting the blame on cyclists if a crash does occur.

Dakic added: "This returns the focus from reducing the consequences of crashes, to minimizing the causes of traffic crashes. Cycling has been incorrectly presented as a dangerous activity. In fact, the health benefits of the daily use of the bicycle outweigh the traffic risks by around twenty-to-one.

"We invite all those who stopped using the bicycle due to the helmet law to return to it, to respect traffic rules and enjoy all the benefits that cycling provides."

"Bosnia and Herzegovina has set an important precedent with this repeal. Any law that mandates the wearing of helmets or other articles, criminalizes the use of bicycles as an efficient and affordable means of transportation."

"Cyclists should be able to choose whether to wear or not to wear helmets. The Centre for Environment, a member of the ECF, has highlighted this important issue. Cycling is not an overly dangerous activity and brings tremendous health benefits for individuals, and has a positive effect on the environment and society as a whole."

Mexico City has previously repealed a compulsory helmet law, and Israel partially revoked its helmet compulsion law, but the move by Bosnia and Herzegovina is the first all-ages, all-areas repeal.