Which of this town's many retailers made a strong case for purchasing at their store?

Coastal Eastbourne would make an idyllic setting for packing in the miles along the seafront, even if the beach promenade does have ‘no cycling signs’ plastered all over it. Mystery Shopper ignores the warnings and goes in search of road bike and some fish and chips…

Phoenix Cycles
The first visit of the day sets the bar and nine times out of ten independent stores set the bar at a reasonable height.
It wasn’t to be with this visit, however, as having done circles on the shop floor for five minutes unseen by staff, a matter of seconds more would have seen a walk out without interaction.
Thankfully, prior to that, intervention by the staffer came. Popping out from behind the counter, the staffer heard my brief and without hesitation told me “you’ve come at the wrong time of year.” There’s a time of year for shopping?
“It will be around two months before we have stocks of road bikes again,” said the assistant. It goes without saying that that long a period without key items such as road bikes in a seaside town with cyclists aplenty is without doubt lost money.
I was passed a Giant catalogue and told to return in a month’s time. You have to wonder, in this day and age, what kind of customer ready to buy would wait a month to purchase without at least browsing elsewhere.

Halfords
Little else could have fitted my brief better than a Boardman, given the Olympic star’s design team having a knack for knocking out bikes bang on my budget of £800 to £1,000?
Mystery Shopper tends to give ten minutes before being seen in most Halfords branches as staff numbers seem to vary drastically between visits. On this visit very few were present and my assistant was busy unpacking stock on the mezzanine bike department.
Having given near ten minutes I decided to intervene and having established that only the Boardman line would satisfy my brief – asked a few simple questions. Responses ranged from "I think so", through blunt yes and no replies while the staffer continued to unpack cleaning fluids. To summarise the broken pieces of information given, I was advised to shop at Halfords.com where deals I’d find details and "stuff probably a bit cheaper".
Seeing little opportunity to take much more from the experience I chose to leave it there.

Tri Store
One of the more spacious, well presented outlets in town, Tri Store carried a strong range from multiple brands, giving the assistant plenty to contrast and compare.
Both pros and cons were had here, with the latter centering largely around the assistant freely giving up the information on sizing that I’d need to go in order to shop online without any suggestion of why it’s best to buy (and size up) local when dropping £1,000 on a road bike.
There were, however, far more positives to take away, with warranty of each brand in my price bracket covered, a discussion on the transition from flat pedals to clip ins and the intermittent personal recommendations, which ultimately gave this store a lot more character than other stores that had stuck to the hard facts.
This was also the only shop to enquire about whether my employer offered a cycle to work scheme, which according to the staffer “could see me walk away with a bundle of kit,” given my upper 1K budget.

Cycleman
Cycleman appeared to stock a bit of everything, with a display outside and higher priced bikes inside.
Perhaps just to Mystery Shopper’s taste, a manned workstand on the shop floor often makes a retail environment look cluttered. Nonetheless, it does get you seen quickly.
On that plus point, the assistant was able to step away from his repair job and immediately begin selling bikes, flagging three up – one above my price range.
Explaining the build in a jargon free manner, this Italian made Botecchia was compared to the lower priced Claud Butler’s in a concise fashion. Weight was first to be discussed and bikes were pulled from the racks for that hands on approach. The versatility of a flat barred bike with knobbly tyres was then touted, should I ever have the urge to return to my earlier discussed ‘off road roots’.
When Mystery Shopper pushed the topic of add on sale pieces such as mudguards, the helper became a little more stand off-ish, providing no concise answers on whether or not the bikes in question could accommodate guards come winter.

Evolution – Star Store
Greeted on the doormat it was a strong first impression from this town centre store.
As one of the more talkative and confident sales pitches of the day, Mystery Shopper was in store for as long as the duration of a beachfront parking ticket would allow. In that time Evolution’s staff managed to remove bikes from the racks for me to get to grips with, make well reasoned comparisons between the value for money aspects of various brands and dispatch my questions about fitting extras such as guards with ease.
Evolution was only one of two stores to mention properly sizing me up to a bike, which you’d think is a necessity for this kind of purchase. Furthermore, beyond our discussion about guard fitting, the storekeeper also made strong attempts to toy with my semi flexible budget, recommending the purchase of a helmet and cycling shoes, should I choose to clip in.
Resisting the urge to give away any detail that would allow me to order online, this store gave me real incentives to return for a purchase, using 2011 end of line discounts that “may not hang around for long” as a lure.

Summary
It’s tough to say that any store really ‘nailed it’ on this visit. As strong as Evolution and Tri Store were, both had plus points over one another in certain areas – and were furthermore head and shoulders above others in town on this occasion.
There’s plenty of competition in this coastal town and there were a handful of other retailers Mystery Shopper could have visited had we enough room on the page. This, to me, says that if you’re going to be in business here you’ve got to be sharp and stand out in a customer’s mind once they’ve left the store. On this merit alone, Evolution will scoop this month’s Star Store.

Share
Previous Boris, Ken, Paddick and Jones to be quizzed on cycling in the capital
Next Specialized signs up to Cycle Show 2012 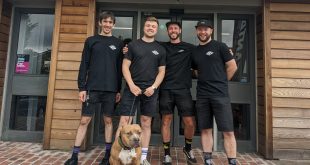 “It was chosen as a location near lots of good riding”: BikeBiz visits Stif Mountain Bikes near Bristol

Located near some mountain biking hotspots, the Stif store near Bristol is perfectly placed as a destination MTB specialist. BikeBiz editor Alex Ballinger takes a tour of the high-end retailer