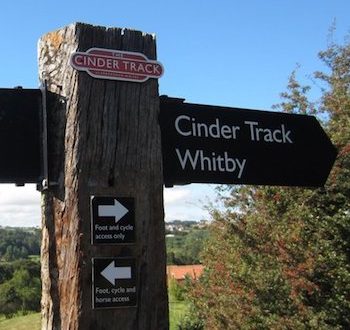 Pete "Mr Crud" Tomkins is one of 2,553 people to have signed a petition opposing proposed changes to the Cinder Track, a 21-mile multi-use former railway line between Scabrough and Whitby. Tomkins lives close to the trail and has been riding on it for more than 30 years (his firm makes mudguards in Yorkshire). The track is owned by Scarborough Borough Council which commissioned a Restoration Plan from Sustrans funded by a Coastal Revival Fund grant. The proposed £7.2m plan for the trail includes various changes, including resurfacing some parts of it.

"The proposals are 99 percent opposed locally," Tomkins told BikeBiz. "The track is adequate as-is. My 5-year old granddaughter has ridden to Ravenscar and back recently. The original survey [from Sustrans] merely said ‘Would you like to see improvements made to the surface’. Naturally, 75 percent of respondents said ‘yes’.

"However, the plans go a bit beyond what any reasonable person would consider to be ‘improvements’. The track itself has narrowed in places as nature encroaches, but to me this just adds to the intimate feel. Every inch of the track, from Scarborough to Whitby, is safely and easily navigable by bike. I rode the whole line two months ago on a road bike, and can verify this fact.

"From a thorough study of the proposals, all of this intimacy will be lost if the green light is given. Sustrans seem bent on creating a kind of cyclists’ motorway, a suburbanisation of the line, a rural road, effectively. As a lifelong, experienced cyclist, and ex-British Cycling team member, I can assure you that this will result in a fundamental change to the character of the route, to the detriment of all users. Speeds will increase substantially. It will be effortless, for example, to maintain 30+mph from Ravenscar all the way down to the Boggle Road. Not much imagination is needed to forsee the inevitable consequences."

It’s so depressing seeing this kind of opposition to the development of functional cycling infrastructure https://t.co/BGE3YXUFZQ

Sustrans said consultation on its proposal is ongoing with parish and town councils, the North York Moors National Park and other agencies.

"We had over 1,000 responses to our initial Survey Monkey consultation with almost 80 percent of respondents supporting improvement. There will need to be further discussion with local stakeholders about surface options if Scarborough Borough Council choose to adopt the plan and progress with its implementation."

She added: "We’re looking at opportunities to bid for further substantial funding to implement the plan’s recommendations if Scarborough Borough Council adopt it later this year."

The petition opposing Sustrans’ proposals complains that the Cinder Track would be resurfaced with asphalt and would be widened to three metres wide, which would require cutting back of vegetation, including removing trees.

"This will have a negative impact on a diversity of local wildlife as the trees and verges are a habitat for badgers, birds, insects and wildflowers," says the petition.

"It will also cause irreversible harm to an area of outstanding natural beauty, currently a varied, tranquil, meandering country bridleway with stunning views and an unparalleled sense of wilderness and remoteness. A further proposal is that the widened track will be comprised of a hard sealed surface, with asphalt or bitumen-macadam as the preferred materials.

"The width and surface of the track will attract road bikes and cyclists who wish to speed, and this has serious safety implications for current users, who include ramblers, families, leisure cyclists, horse riders and dog walkers."

The report from Sustrans to the borough council said: "There are parts of the Track that need substantial investment and proactive management to protect it for future use. If this is not done the Track is likely to continue to deteriorate."

The report adds: "The rough surface makes a majority of the route difficult or impossible for some users, for example young families, novice cyclists or people in wheelchairs. The unsealed surface is not of high quality and there is very limited funding for maintenance."

The trees to be removed are those blocking the drainage ditch installed by the builders of the original railway line.