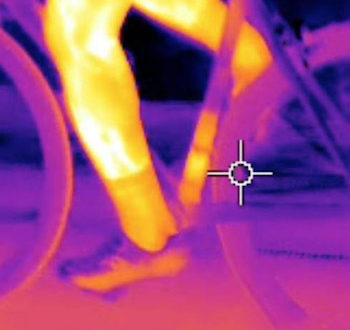 An "engine" was discovered earlier today on a bicycle used in an amateur road race in the Dordogne, alleges a French newspaper.

The discovery is said to have taken placen during an operation conducted by the Prosecutor’s Office of Périgueux, the French Cycling Federation and the French Anti-Doping Agency, reports Le Telegramme.

The race was staged in Saint-Michel-de-Double, about fifty kilometres south-west of Périgueux.

"We have been advised by an official of the French Anti-Doping Agency of a suspicion of cheating by means of an electrical system," said Jean-François Mailhes, the Périgueux public prosecutor. He said it was "presumably a small engine."

According to a French TV station a mechanical device was found in a water bottle affixed to the bicycle’s frame. The bicycle was a Laplace, a Chinese open-mold brand.

Source(s) previously tweeted. Seems to be the same bike as the one under investigation. Note the black bidon, handlebar tape bulge. pic.twitter.com/zAX1rKpntP

The 43-year-old rider has been detained by the local police. If proven, this would be the third "motor doping" scandal to rock the sport. The first was in 2016 when a 19-year old Belgian cyclo cross rider was discovered to be motor assisted. Femke Van Den Driessche was a rider for for the Wilier-equipped Kleur Op Maat team which is equipped with bikes. The second was when a 53-year-old Italian rider was reportedly caught with a hidden motor in his bike in July this year.

Driessche’s bike was equipped with a Vivax-Assist motor, more normally found on the bikes of senior riders wishing to keep up with younger riders. Vivax-Assist has exhibited at cycle trade shows, and its technology is not illegal. The Vivax product was developed from the Gruber-Assist motor, launched in 2008. It turns a bevel gear attached to the crank axle.

The UCI has been using anti-motor-doping iPads for some time, but their efficacy has been called into question, and newly-elected UCI president David Lappartient has promised to improve the organisation’s motor-doping detection methods. TV sports programmes have claimed to be able to detect motor-doping with the use of handheld thermal cameras.

The Vivax-Assist motor is now considered to be rudimentary compared to other motor-doping technolgies said to be available "for a price." There have been allegations that pro riders have been using bikes equipped with electromagnetic induction wheels, costing over €20,000. The motors are said to be contained within the carbon walls of the wheels.