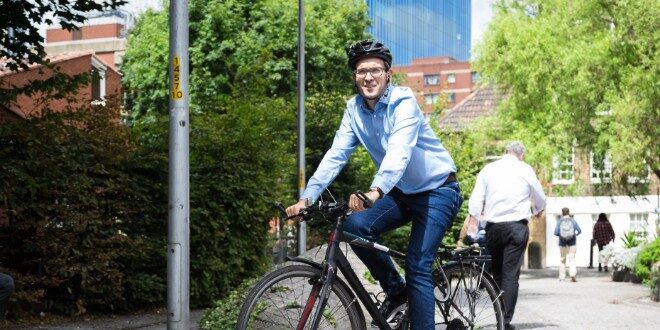 The Mayor of London Sadiq Khan and TfL have unveiled their London Streetspace programme which will rapidly transform London’s streets to accommodate a possible tenfold increase in cycling and a fivefold increase in walking when lockdown restrictions are eased.

“With London’s public transport capacity potentially running at a fifth of pre-crisis levels, up to eight million journeys a day will need to be made by other means. If people switch only a fraction of these journeys to cars, London will grind to a halt,” said walking and cycling commissioner Will Norman last week.

To prevent this happening, TfL will rapidly repurpose London’s streets to serve this demand for walking and cycling in a major new strategic shift.

TfL, working with London’s boroughs, will make changes – unparalleled in a city London’s size – to focus on three key areas:

– The rapid construction of a strategic cycling network, using temporary materials, including new routes aimed at reducing crowding on Underground and train lines, and on busy bus corridors.
– A complete transformation of local town centres to enable local journeys to be safely walked and cycled where possible. Wider footways on high streets will facilitate a local economic recovery, with people having space to queue for shops as well as enough space for others to safely walk past while socially distancing.
– Reducing traffic on residential streets, creating low-traffic neighbourhoods right across London to enable more people to walk and cycle as part of their daily routine, as has happened during lockdown.

Euston Road is one of the first main thoroughfares to benefit from temporary cycle lanes. Park Lane could follow suit under plans being studied.

The temporary schemes will be reviewed by TfL – and could become permanent.

TfL has already begun making improvements to boost social distancing using temporary infrastructure. Pavements have already been doubled in size at Camden High Street and Stoke Newington High Street and widened at six further locations – with more to follow in the coming weeks.

Further improvements as part of the London Streetspace plan will include:

– Creating new walking and cycling routes along major corridors, including temporary cycle lanes in Euston Road. TfL is also looking at creating temporary cycle lanes on Park Lane. Upgrades will also be made to existing routes including creating sections of temporary segregation from Merton to Elephant and Castle, and Pimlico to Putney. Space for cycling will be created between Catford town centre and Lewisham via the A21, and on the A23 between Oval and Streatham Hill.

– The Cycleway 9 scheme between Kensington Olympia and Brentford and the Cycleway 4 scheme between Tower Hill and Greenwich will be accelerated with temporary measures so the Londoners can benefit from them more quickly. Meanwhile, on-street parking and lanes for cars and general traffic will be repurposed to give people on foot and on bikes more space.

– Widening more pavements in town centres to allow people to access local essential shops and services more easily. Pavements will be widened in more than 20 locations, including in Brixton and Earl’s Court in the coming days.

– Working to make walking and cycling in local neighbourhoods safer and more attractive by reducing the speed and volume of motor traffic. A low-traffic neighbourhood will be created in Hounslow along the future Cycleway 9 route by closing local roads to through traffic and further locations across London will follow, with TfL actively supporting boroughs to reduce motor traffic on residential streets to make walking and cycling safer and easier.

“The capacity of our public transport will be dramatically reduced post-coronavirus as a result of the huge challenges we face around social distancing,” said Khan. “Everyone who can work from home must continue to do so for some time to come. The emergency measures included in our major strategic London Streetspace programme will help those who have to travel to work by fast-tracking the transformation of streets across our city. Many Londoners have rediscovered the joys of walking and cycling during lockdown and, by quickly and cheaply widening pavements, creating temporary cycle lanes and closing roads to through traffic we will enable millions more people to change the way they get around our city.

“I urge the Government and boroughs to work with us to enable Londoners to switch to cleaner, more sustainable forms of transport – and reduce the pressure on other parts of our transport network – once the lockdown is eased.”

Since London entered lockdown on 23rd March, TfL has, as part of the national strategy to beat the virus, been urging Londoners to only make essential journeys. TfL will continue to look at its existing walking and cycling projects to see where these could be used to create space for people walking and cycling more quickly.

The new measures will build on TfL’s work, which has seen roads across London transformed under the Healthy Streets programme. The amount of protected space for cycling in London has tripled over the past four years, while major projects across the capital such as the transformation of Highbury Corner have increased in the amount of space available for people on foot. There are currently 160km of signed Cycleways across London.

Specific measures of London Streetspace will be announced in the coming weeks.