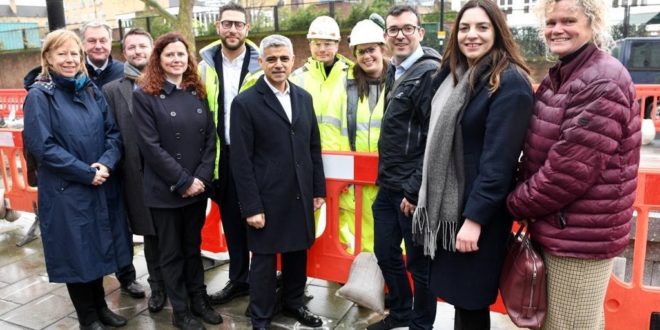 Mayor triples protected cycle space in London ahead of schedule

The Mayor of London Sadiq Khan has tripled the amount of protected cycle space in London since 2016. 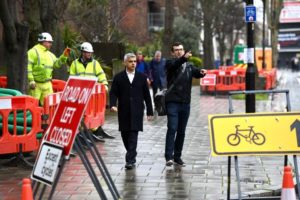 There are now 162 kilometres of protected lanes that are either complete or under construction, up from 50 kilometres in 2016. Laid out end to end, this would stretch from Leicester Square to Birmingham’s New Street station.

Khan today met construction workers in Lambeth who are building protected space for cycling along Baylis Road as part of Cycleway 5 between Waterloo and Clapham.

“I’m really proud to have tripled the amount of protected space for cycling – making it safer and more convenient for Londoners across our city to cycle as part of their everyday routine,” Khan said.

“My record investment to enable more people to cycle is vital to tackle some of the biggest challenges our city faces – including the climate emergency and our toxic air – and has led to record cycling numbers. I’m determined to build on this success which is why I’m committed to expanding our network further so that even more Londoners can enjoy using our high-quality cycleways to get around the city.”

Will Norman, London’s walking and cycling commissioner, added: “I’m delighted that we have achieved our target of tripling protected space for cycling ahead of schedule. It’s clear that where we have built new high-quality infrastructure more Londoners are choosing to cycle, and our continued investment in a city-wide network will help support people of all ages and abilities to take to two wheels.”

Construction work is currently underway across London, including: 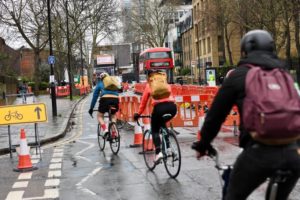 Since 2016, more than 40 kilometres of protected space has been added through the Mini-Hollands programme, which includes Waltham Forest’s cycle network, Kingston’s Go Cycle scheme and Cycle Enfield. Last year a new route through London, Cycleway 6, opened between Elephant and Castle and Kentish Town.

The number of people using this new route since it was completed grew by 115% between September 2018 and September 2019.

Gareth Powell, TfL’s managing director for Surface Transport, said: “Enabling more people to cycle and walk more often is vital to supporting London’s growth and ensuring that the capital is a clean, healthy and sustainable place to live, work and visit.

“We’re determined to make sure that neighbourhoods across London have access to safe, high-quality cycle routes and continue to build a network of Cycleways that everybody can use to get around the capital.”