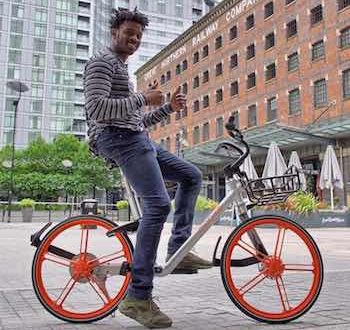 Mobike has today been officially launched in Manchester, with the cooperation and blessing of Transport for Great Manchester. The dockless bike share scheme is operated by a Chinese start-up company. Fellow Chinese start-up Ofo has today launched a self-policing charter for the burgeoning dockless bike share sector which, claims a Dublin-based start-up, could reshape cities.

Mobike, which is self-funding the Manchester roll-out, hopes that its bikes will soon become a key part of the city’s transport scene.

The Chinese company has partnered with property developers (such as MediaCityUK and Exchange Quay), BikeRight, Manchester Metropolitan University and Salford University as well as TfGM to help make its debut a success. Manchester is Mobike’s 100th city launch, but its first in Europe.

Users pay a refundable deposit of £49 to use the Mobike scheme, with usage of the bikes charged at 50p per half an hour.

Ofo hopes its charter will "serve as a call to action for all current and future bike sharing operators to uphold high standards of service at all times."

“We believe it is important to set a positive example for our industry. With this charter, we are publicly setting the bar of standards we will be upholding, and we hope we will inspire others to follow.”

Ofo’s charter recommends that all bike sharing schemes should:

All shared bikes should have:

All bike sharing schemes should:

All bike sharing schemes should:

The dockless bike share sector is potentially transformative – read this long-form article on BikeBiz – but it’s not new. It has been around since 2001 when German train company Deutsche Bahn launched its Call-a-Bike scheme. The largest dockless bike share operater in Europe is Nextbike of Germany.