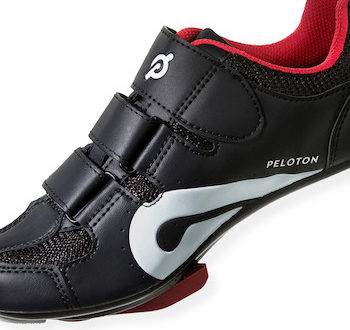 To ride one you need to be clipped in via Look Delta pedals but the Peloton bike goes nowhere, fast: it’s an in-home studio bike. Peloton of NYC doesn’t make much on selling the $1,995 bike, aiming instead to profit from its monthly subscription for access to its upbeat studio instructor stars.

The internet-connected bike comes equipped with a 21.5-inch screen and front-facing camera, and competes with the likes of Flywheel and SoulCycle, which also market indoor bikes with subscription models (but with a greater emphasis on attending live classes). Wattbike makes a better studio bike and cycling software service Zwift is more appealing to hardcore cyclists, but Peloton believes it’s in the lead with time-poor millennials, many of whom want communal sweatfests but without the stress of actually riding on roads.

The ‘Netflix for fitness’ company was founded in 2012 and is believed to have a target of 200,000 subscribers by the end of this year. The company streams 12 hours of live cycling classes every day, and riders can choose from more than 4,000 on-demand classes via the bike’s large screen. There’s also an iOS app. Users call the DJ- and star-instructor-led sessions “addictive”.

The $39 a month subscription fee helped the company to generate $170 million in revenue in 2016. The Manhattan-based company raised $325 million earlier this year and is valued at $1.25 billion.