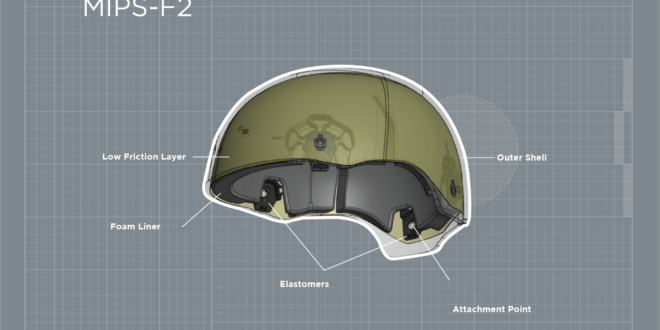 MIPS of Sweden has announced details on two new products for insertion into hardshell helmets: F2 and E3. This expands the "reach of the MIPS technology across more brands and models," said a company statement.

MIPS was developed to counter rotational forces present when helmets strike hard objects. These forces are linked to brain injuries, like concussions and chronic traumatic encephalopathy.

The MIPS-F2 system, is built on the standard MIPS low-friction layer that provides 10-15 millimetres of omnidirectional movement in the two to three milliseconds following an impact. Unlike the current system, the F2’s low-friction layer is situated between the outer shell of the helmet and the foam liner on the interior. A series of elastomers and nylon brackets molded into the EPP allow the foam liner to move independent of the low-friction layer and the outer shell. This, says MIPS, results in at least a 10 percent reduction in rotational forces resulting from oblique impacts.

The MIPS-E3 GlideWear liner is a dual-ply textile based insert that acts as a low-friction layer and is composed of two facing, low-friction surfaces, multi-directional stretch fabric layers. The sliding motion is enabled when both surfaces move independent of each other. The fabric can be either sewed or welded together to fit inside the helmet. When inserted between the comfort padding of the helmet and the energy absorbing helmet shell, the GlideWear liner provides broad coverage from rotational impacts, "without sacrificing comfort or sweat absorption," says the company.

MIPS CEO Johan Thiel said: “MIPS now has a long history helping to improve brain safety and risk of injury in the cycling and snow sports communities. With a broader range of solutions, we can expand on that and make it so more companies can easily and affordably incorporate MIPS into their existing designs."

Like all MIPS products the new ones are designed in close collaboration with helmet brands. Models featuring the MIPS-F2 and MIPS-E3 GlideWear will come to market in spring of 2018, starting in the snow sport market. The technologies will later be incorporated into cycle hardshell helmets.

Share
Previous Primal Europe to kit out Welsh Cycling programmes
Next Cycling startups: it’s all about the learning curve