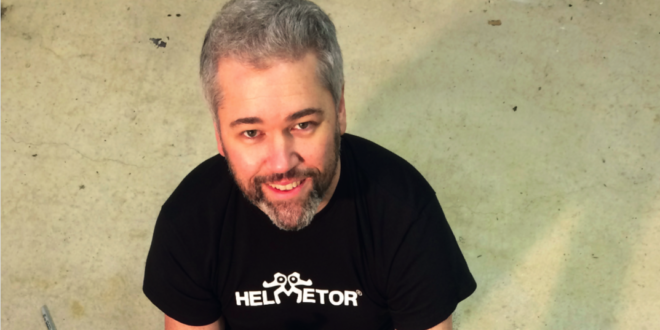 Cycling startups: it’s all about the learning curve

However, the desire for a solution to helmet storage started a while before that; borne from a frustration of finishing a ride only for the first seconds of post-ride ecstasy to be spoilt by wondering what to do with my helmet.

It was whilst playing with a wire coat hanger that the solution presented itself: a spring-leaf mechanism that could fit a range of helmet vent sizes! Many late nights followed with a tub of remouldable plastic, trying to get the perfect shape. A hole was added to the end of the arm for the addition of a lock. It took a lot of perseverance to get the basic form, but to bring it on further required my brother Jonnie and family friend Dessie to come onboard.

From then on it was a steep learning curve – looking for funding, finding a good product designer, applying for patents –
basically learning a new language! After another long stretch of perseverance that tested us financially, emotionally, and
creatively, three years later we had our product, with which we were pleased. Having the physical product was one thing; showing it to the world was quite another – and knowing how to do that effectively with no prior knowledge or experience of sales or marketing appeared an even bigger task, and still is!

So once again it was back to school, familiarising ourselves with a whole new world of promotion, social media, websites, VAT returns, press kits and more. We had to learn how to connect with the cycle industry. At some point you have to take a leap and jump in with both feet first. Keep testing the water with your big toe and you’ll lose momentum, time and money. That’s why we took a calculated financial risk and headed to the Cycle Show 2017. Aside from the hours of preparation, the biggest unknown was how the general public and the trade would react to Helmetor.

From children to pensioners, praise and encouragement became as valued as hard currency. People were genuinely interested in our story, and we realised that marketing and promotion are most effective when you stick to being yourself. We were pleasantly surprised by the warm welcome given by the established cycling brands, media and personalities to startups such as ours. With a bit of self-belief and a smile, you will at least be given the chance to introduce your product. It will continue to be a learning curve, but one of the best parts so far has been the opportunity to make new friends and experience the inner workings of the sport we love.