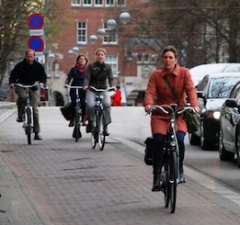 Ahead of the election for the Tees Valley’s new Metro Mayor on May 4th, the Tees Valley Cycle Campaign, working with the national cycling charity Cycling UK, has secured support from all four candidates to improve cycling in the region.

Cycling UK is working with local groups in each of the six Metro Mayor locations with the goal of persuading candidates to sign up to a set of local-specific asks. The Tees Valley is the second location to have all candidates from the main parties unanimously pledge their support for Cycling UK’s campaign asks, after the West Midlands.

Chair of the Tees Valley Cycle Campaign Ian Sproxton commented: “It is very encouraging that all the candidates have indicated that they are prepared to take the views of cycling voters into account. The Tees valley Mayoral elections offer the potential for a candidate with the necessary vision to implement a coordinated transport policy across the region as a part of much needed economic development.”

Cycling UK’s Space for Cycling campaigns officer Tom Guha added: “Over the next ten years, the Tees Valley Combined Authority plans to create 25,000 new jobs and build 22,000 new homes. Such bold ambitions require a modern and efficient transport system – we are very pleased that all candidates have acknowledged the essential role cycling plays in achieving this.

“The election of a Tees Valley mayor is an opportunity for the region to re-vamp its transport system to be more people-friendly, to alleviate congestion and to tackle lethal air pollution. We are very pleased with the level of engagement from all candidates; we look forward to working with whoever is elected to make a success of all the candidate’s pledges.”