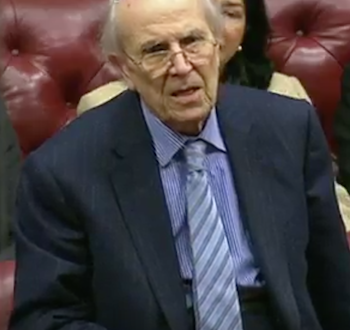 Lord Tebbit gripes about cyclists; heckler yells “get on your bike!”

During an air quality debate in the House of Lords earlier today Lord Tebbit objected to road delays he said were caused by "barricades" erected to protect cyclists. (Presumably he means the protected Cycle Superhighways.) "It can take an hour to drive from Parliament Square to Tower Bridge," he complained, laying the blame not on other space-inefficient vehicles in front of his but on singletrack cyclists. (Peers: "hear, hear!")

A Labour peer interjected: "Then get on your bike!", a reference to Lord Tebbit’s famous catchphrase.

The joke went straight over Lord Tebbit’s head, although his fellow peers most certainly understood the reference as they laughed and broke out in smiles.

“The Noble Lord opposite speaks very impertinently towards me and other people of my age who would find grave difficulty in cycling on the roads these days,” replied Lord Tebbit.

He added that the "cause of the excess nitrous oxide in the air in this area of Westminster and along the Embankment is those wretched barricades which have been put up by the former mayor.”

This was a swipe at both cyclists and Boris Johnson.

Lord Tebbit has spoke in the House of Lords against cyclists a number of times, despite having such a famous catchphrase (which, in fact, has been slightly misattributed). Following 1981 riots in London the then Norman Tebbit said:

"I grew up in the thirties with an unemployed father. He didn’t riot. He got on his bike and looked for work, and he kept looking till he found it."

From then to today, Lord Tebbit has been dogged with the "on your bike" quote.

A video of Lord Tebbit’s complaint, and the mild heckle, has been uploaded to Twitter by BBC online journalist Esther Webber.

Lord Tebbit is told to "get on his bike" by a heckler pic.twitter.com/AnP8Wt7qal

Many of Margaret Thatcher’s former ministers are rabidly anti-cycling. In 2015, Lord Lawson claimed that cycleways were more damaging to London than anything since the Blitz.