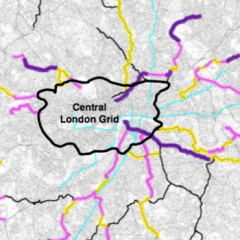 London to double spend on cycling to 5.5 percent of transport spending

London will invest £770 million over the next five years on cycling to 2021/22, said London Mayor Sadiq Khan this morning. According to TfL, that is almost double the average spend of the previous mayoralty, during which period the East-West and North-South Cycle Superhighways were created, and three mini-Holland boroughs were funded. The £154 million per year budget will average to nearly £18 per head, per annum, across London – which approaches Dutch spending on cycling.

“Boosting investment in cycling is great news that will make London a better, greener, healthier city for all," said London Cycling Campaign CEO Ashok Sinha. "The new money will help ensure the Mayor fulfils the promises he made to LCC to triple the mileage of London’s protected cycle lanes, fix the most dangerous junctions and fund a people-friendly ‘mini-Holland’ style development in every borough.”

With London’s population set to grow to above 10 million in just over a decade, prioritising cycling and walking in the way the Mayor is with this budget will ensure the growing city can keep moving.

The investment, part of the Transport for London (TfL) draft Business Plan being published later this week, goes beyond Khan’s manifesto commitment to increase the proportion of TfL’s budget spent on cycling.

Khan promised "further detailed plans for making cycling a safe and obvious choice for Londoners of all ages and backgrounds."

During Boris Johnson’s mayoralty, 2.4 per cent of TfL’s budget was spent on cycling. Over the course of the new Business Plan 5.5 per cent of TfL’s budget will now be spent on cycling. Previous Cycle Superhighways have been mired in controversy with criticism of consultation processes and construction not being properly coordinated. The new Mayor has pledged to learn the lessons from the past.

There will also be a new cyclist and pedestrian bridge linking Rotherhithe and Canary Wharf, creating an important connection between south-east London, the docklands and beyond, linking the forthcoming CS4 to the existing CS3 and CS2 routes north of the river.

Khan has yet to appoint a "cycling Tsar" but a new walking and cycling commissioner for London will be appointed "very shortly", said Khan.

Khan said: “I said in my manifesto that I’d be the most pro-cycling Mayor London has ever had. Today I’m delighted to confirm that TfL will be spending twice as much on cycling over the next five years compared to the previous Mayor. Making cycling safe and easier can provide huge benefits for us all – improving our health, cleaning up our toxic air, and helping tackle congestion. By spending £770 million over the course of the next TfL Business Plan, we’ll now be spending the same per head as Denmark and the Netherlands – places famous around the world for their cycling.

“Our plans include consulting on two new Cycle Superhighways next year, in addition to a new East-West Route. And unlike the previous Mayor, we will continue to focus on how we can minimise disruption and congestion as we push ahead with the construction of new cycling infrastructure."

Andrew Gilligan, the previous administation’s cycling commissioner, said Khan had to stop issuing press releases and get on with building.

"A promised spend of £154m is not a “record” and is less than we spent last year. But even this level of spending will not be achieved unless the Mayor actually starts building something. So far, most movement has been in the other direction, with shovel-ready schemes delayed or cancelled.

"City Hall will be judged, as we were, by what it does, not what it says. Seven months into the new mayoralty, it is time to stop issuing press releases and get started."