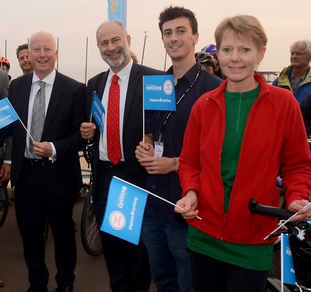 Cycling UK and Bricycles organised a rally this week in favour of the Space for Cycling campaign, outside the Labour Party conference in Brighton.

The rally was attended by roughly forty people campaigning for better cycling infrastructure, as well as Fabian Hamilton MP and Stephen Morgan MP and the shadow secretary of state for transport Andy McDonald MP.

At the rally, Mr McDonald announced that a Labour government is committed to spending £10 per head on cycling and walking. The £10 per head figure echoes the amount recommended in the Get Britain Cycling Report, produced by the All Party Parliamentary Cycling Group.

Commenting on the announcement, Mr McDonald said: "Our country is blighted by illegal air pollution, crippling congestion and a public health crisis. Cycling and walking can holistically address all these issues in an efficient, cost-effective way. Labour is committed to ensuring that potential is met and is committed to revolutionising our transport system through cycling and walking."

Labour MP for Leeds North East and treasurer of the All Party Parliamentary Cycling Group Fabian Hamilton added: "As a long standing member of the All Party Parliamentary Cycling Group, I am thrilled to hear our shadow transport secretary pledge £10 per head for cycling and walking if elected. We need a radical shift in our transport system and we are committed to making sure that happens."