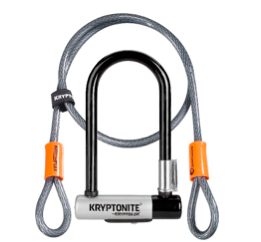 Sports security and safety brand Kryptonite has announced its new upgraded and redesigned range of U-Locks that also come with simplified messaging for retailers and consumers alike.

With an ever-growing product portfolio, Kryptonite has increased its focus on greater safety features with its latest iteration of U-Locks. Now with double deadbolt and anti-rotation, the new locks provide better security and performance, as well as a new design with improved dustcovers and logos.

Kryptonite has renamed its Kryptolock S2 series to just Kryptolock, while its Evolution Series 4 will now be known as Evolution. In addition to this new and simplified range messaging, its new Kryptolocks will all be Sold Secure Gold.

As well as the Sold Secure ratings that exist on many Kryptonite products, the brand also has its Anti-Theft Protection Offer, which guarantees that if any rider is unfortunate enough to have their lock defeated by a criminal and a bike stolen, the company will reimburse the money of the stolen item, subject to terms and conditions.

Kryptonite brand manager John Harris said: “Kryptonite has been working hard over the last few years to not only improve its service offering but also make its locks more effective than ever and streamline their product ranges. As always the product is top quality with increased features and improved levels of security, but with so many it can be a daunting prospect for consumers and retailers alike. It is our hope that the re-vamped naming, improved spec, sold secure ratings and after-sales initiatives will make life much easier for dealers when selling Kryptonite.”

All new products in the Kryptonite range will be available from June. For all enquiries, please contact your Madison accessories sales agent.

Share
Previous Is Eurobike ideal for startups?
Next Sunderland bike shop owners ride to their holiday home … in Turkey