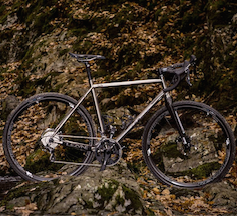 The original Tripster ATR (Adventure, Tour, Race) was in the first wave of bikes to utilise drop-bars on a diverse, wide terrain bike. Launched in 2012, the titanium Tripster became one of Tripster’s best selling models. The combination of the durable titanium combined with large tyre clearances and geometry suitable for various riding styles pushed sales of the bike as a popular choice for adventure riding.

The AR v2 is an evolution of the original frame set with significant changes. The bike now features a titanium tube set with an increased gauge on the downtube and a flattened-off section of the top tube. Kinesis says that this allows frame bags to sit more securely on the bike whilst also making it more comfortable to ride.

Additionally, there’s a new rear triangle design, incorporating flat-mount disc brakes and a new switchable rear dropout system that gives owners the choice of running a 12 x 142mm through axle that comes with the bike, or a more traditional 9 x 135mm.

The new internal routing on the Tripster accommodates brake and shifter cables, hoses and Di2 wiring inside the frame. Kinsesis explained that this reduces water or mud ingress whilst improving shifting reliability.

Tyre clearance is increased on the Tripster and it’s now possible to run up to 45mm 700c tyres or 650B wheels with two-inch MTB tyres. To accommodate these changes, Kinesis has also revealed a new straight blade, full carbon and tapered 12mm through axle fork called the ATR, specifically designed to fit the Tripster.

Kinesis say that they’ve been given extensive feedback since the original ATR, taking note of the trend that many people are increasing the amount of technical riding that they’re doing on drop bars. Bruce Dalton of Kinesis commented: “Right from the beginning in 2012, the Tripster surprised us with how popular it was and how much people enjoyed riding it. They’ve always been fun to ride, capable and tough and people have taken them on some amazing adventures all over the world, like adventurer Ed Shoote from We Love Mountains.

“We’ve given the Tripster a thorough redesign for this new V2 model. Customers and our ambassadors were telling us they wanted an even more capable and versatile bike to help them do more adventurous riding, but with all of the qualities they loved about the original. We’ve worked long and hard on making the v2 an even better bike and we’re really pleased with the end result.”