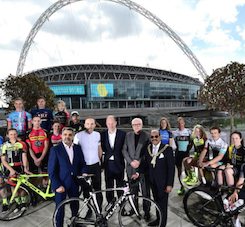 UK mid-market hotel chain Jurys Inn has been announced as the headline sponsor of The Tour Series event, which comes to Wembley Park this May for the first time.

The event will bring Britain’s leading male and female cyclists to the iconic location for an evening of racing on Tuesday, May 16th. The Tour Series will visit Wembley Park with races on a 1.5km circuit of the area, including the concourse of Wembley Stadium and Olympic Way, known to fans the world over as Wembley Way.

Commenting on the announcement, Jurys Inn managing director Jason Carruthers said: "Jurys Inn is delighted to present the very first Wembley Park round for this year’s Tour Series. The race is already set to be one of the most exciting ever and we’re confident that race-goers and visitors will enjoy this iconic event.”

The Wembley Park round will feature an afternoon of community events and non-elite activities on the circuit from 11:00 am before the Brother Corporate Grand Prix kicks off at 16:30, with up to 15 teams battling it out in a ProAm relay format.

The men’s teams will take to the circuit for Round Four of The Tour Series at 20:30, led by defending team champions JLT Condor of double-Olympic Champion Ed Clancy OBE. The race and podium presentations will conclude shortly before 22:00 on the Finish Straight outside the London Designer Outlet.

Race director of organisers SweetSpot Mick Bennett said: "We are delighted to be bringing The Tour Series to Wembley Park and welcome the news of the partnership with Jurys Inn to elevate the profile of the event further still. We are privileged to have the opportunity to race in this spectacular location and one that is so synonymous with world-class sporting events.”

The Tour Series will get underway at Redditch in Worcestershire on Tuesday 9 May, finishing three weeks later in Stevenage on Bank Holiday Monday, 29 May.