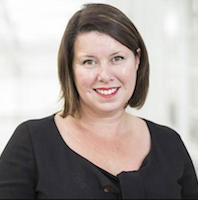 Harrington – who is currently responsible for running both Wembley Stadium and St George’s Park in addition to women’s and development team games away from Wembley ­– has almost 15 years of experience in senior leadership roles in a sports environment.

She joined the FA in 2011 as managing director of St George’s Park, tasked with the final stage of construction and launch of a £100m elite training centre – home to the 24 England teams. She was also responsible for developing the strategy for the centre and its commercial performance against its business plan.

Harrington said: “I am thrilled to be asked to lead British Cycling as it embarks on a new chapter in its history. This is the right time to be joining one of this country’s leading governing bodies. British Cycling already has a fantastic track record of using elite success to inspire millions of people to get active by getting on their bikes and is now setting its sights on new ambitions and a new way of working.”

Commenting on the news, Jonathan Browning said: “In appointing Julie, I am delighted that we have found someone with exactly the right mix of skills to lead British Cycling as we embark on a period of significant change.

“Julie has substantial experience at the top level of sport and I am confident that she will excel in what is a landmark and exciting appointment for British Cycling. Her background in sport and commercial partnerships will prove vital in delivering our joint vision with HSBC UK to make cycling the number one sport and activity of choice in Britain. I am confident she will help us achieve our goal of becoming a world-class governing body.”

Global head of sponsorship at HSBC Giles Morgan added: “Many congratulations to Julie Harrington on her appointment as British Cycling chief executive. British Cycling and HSBC UK have a desire to develop cycling at grass-roots level, encouraging families to revisit the joys and benefits of getting on a bike. Julie’s experience in sports development is a very good fit to help us make a tangible difference, translating elite success into a lasting legacy on our streets.”

Prior to working for the FA, Harrington spent nine years with the Northern Racing Group as operations director. She has also worked in senior marketing roles for blue chip leisure organisations such as British Airways, Whitbread, Carlsberg-Tetley and Allied Domecq. Harrington will start working for British Cycling in May 2017.