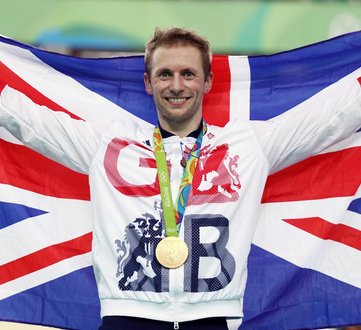 The Cycle Show has announced that Jason Kenny CBE will open the 16th edition of the show next Friday, September 21st.

Six-time gold medal winner Jason Kenny CBE, the joint holder of the highest number of Olympic golds for a British athlete, will open The Cycle Show next Friday morning before making his appearance on the stage at 11.00 that day. Having gripped the nation in last year’s Rio Olympic Games, Kenny will share his experience and perspective with the show’s visitors.

“We are thrilled to welcome such a roster of talent to this year’s show. To have the support of so many big names from within the sport shows just how highly regarded and anticipated this event is to the cycling community.”

Movistar team rider Alex Dowsett is one of the UK’s most popular cyclists, and with a world hour record, multiple national TT championship wins and a commonwealth gold medal, he is strongly considered to be one of Britain’s best-ever time trialists. Appearing on the Canyon stand K63 for a signing session on Friday 22 – 1PM. Dowsett will grace the Wattbike stage for a Q&A with Tour de France commentary favourite Ned Boulting later that afternoon – 2PM.

Considered one of today’s finest grand tour riders with Tour de France, Vuelta a España and two Giro d’Italia titles under his belt, Vincenzo Nibali will be the first special guest of the day on Saturday 23rd. He will appear on the Wattbike stage in the morning for a Q&A and will host signing sessions on the FSA stand G65.

Vuelta a España winner, seven-time consecutive Paris-Nice champion and winner of nine Monument Classics, Sean Kelly will take to the stage on both Saturday 23rd at 1.15pm and Sunday 24th at 2pm. With 193 victories over a 17 year professional career, Sean’s sessions are not to be missed.

Eddy Merckx will be taking to the stage at 11.30 on Sunday 24th. Generally considered as the greatest cyclist ever, the joint record holder for Tour de France titles has 525 career wins under his belt and defined his era of cycling.

Olympic champion Jason Kenny added:“With the ever-growing number of people taking to the saddle in the UK, it’s so important to have events like The Cycle Show to raise awareness of the sport and the people within the industry. It’s a great chance for people to really see the work that goes into being a cyclist competing at the top level, and the highs and lows that go along with it. For me, it’s also an opportunity to see some of the new products the cycling world is creating.”