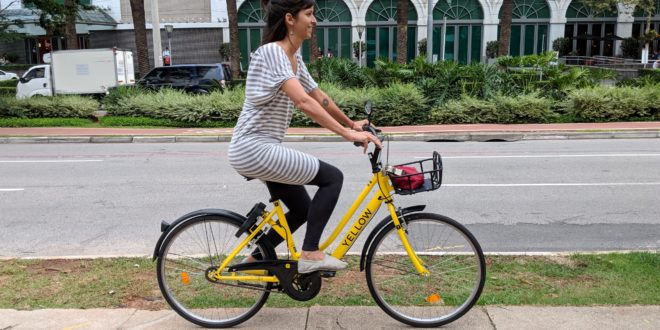 Yellow, a Brazilian startup in urban mobility solutions, has raised $9 million in seed round funding to launch the first dockless bike-sharing service in Brazil.

The company was founded by Ariel Lambrecht and Renato Freitas, co-founders of 99 – the ride-share company acquired by Didi in a $1 billion deal earlier this year and Brazil’s first tech ‘unicorn,’ along with Eduardo Musa, the former owner and CEO of the established bicycle manufacturer CALOI.

Yellow plans to initially deploy 100,000 bikes in São Paulo before expanding throughout the rest of Brazil, where it aims to ultimately deploy over one million bikes. Yellow will use this round of funding to grow its team, refine the mobile app experience and introduce its first 20,000 bicycles to the market. Yellow’s service is dockless, with bikes being released through a mobile app. The company is also working on e-scooters and e-bikes, which will soon complement its individual mobility platform.

“Our goal is to improve circulation of urban traffic and curb harmful greenhouse gas emissions by providing a fun, cost-effective mode of transportation that integrates with other public transit systems to optimise daily routes in big cities.”

“This combination of factors puts the company in a good position to solve Brazil’s urban transportation problem.”