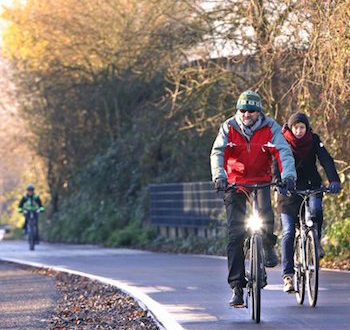 Investing in advocacy brings the best return on investment for any company that wants to see their sales increase, says the Cycling Industry Club’s Kevin Mayne. "Countries with the highest cycling modal share are also the ones with the highest average per capita expenditure on bicycles and accessories," he said.

"We showed for the first time exactly how government investments in cycling flow directly into industry sales."

The Cycling Industry Club is an initiative of the European Cyclists’ Federation, based in Brussels. Members include executives from Shimano, Bosch, Giant, Accell, PON, KMC, Cycling Sport Group, Cycleurope and others. The executives are aiming to grow the market for cycling through collaboration with cities, governments and consumers.

CIC works via ECF’s dedicated Leadership Program to reach local and national advocates in order to professionalise and grow their influence to policy-makers, "while putting more people on bikes," said Mayne.

"And it works! Countries where the Leadership Program operated witnessed a 9 percent increase of bicycle sales in just four years. In Spain, that increase reached 15 percent."

Mayne said the highlights for 2016 included:

"Our plans for the next year is to take the cycling industry to the next level," promised Mayne. This will include working on a European Cycling Strategy for growth and innovation.

"After years of work at the highest political level, the first European Cycling Strategy is coming to life," said the former CEO of CTC.

"What does that mean for the industry? A whole chapter to represent industry interests at the highest political level on an equal footing with the automotive industry, aviation, rail industry and so on."

Mayne said CONEBI – the Confederation of the European Bicycle Industry – had played a big part in for helping the CIC realise its goals.

"Success went global as well," continued Mayne, "as ECF placed cycling in one of the United Nation’s most important policy documents, the new Urban Agenda."

He stressed: "We continue delivering numbers to showcase cycling as an instrument of growth. Our newest report on Economic Benefits of Cycling shows that every European citizen benefits up to €1000 from cycling; that is over €510 bn per year. This makes the case for all local, national and international governments to create a dynamic investment plan on cycling and active mobility urgently."

"We are also working with high-tech and data companies and policy makers to get the most out of connectivity and to coordinate a smooth integration of cycling within the new Mobility-as-a-Service ecosystem."

He concluded: "It is due to the continued support from members of the Cycling Industry Club we are able to make a policy impact for cycling at the global and EU level."