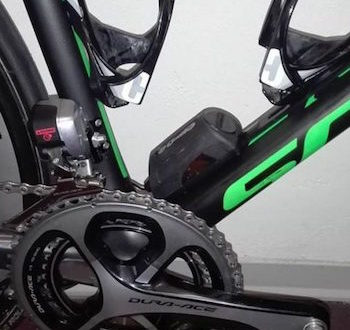 The auto-lubing system from Flaér of Scotland will be fitted to the bikes of the Australian Orica-Scott professional cycling team in 2017 (the team was formally known as Orica-BikeExchange).

The team’s bikes will be fitted with Flaér’s Revo Via chain performance system for use in the 2017 UCI WorldTour.

The Revo Via works by applying micro-doses of specially-developed Via Fluid to the chain whilst riding, so the chain remains perfectly optimised. The company – which is a spin-off from Scottoiler – says Revo Via reduces transmission losses to the absolute minimum providing power gains of up to 12 watts at the wheel, a figure which increases the longer the duration of the ride.

“Flaér has made a very innovative approach to our setup and it will be interesting to see the various advantages they offer”.

The team will also be using Flaér’s new range of bike care and performance products. This will include Guard bike protector spray and Revive bike cleaner.

“We are really excited to be working with Orica-BikeExchange. As a team that is continually looking for the next level in performance, we have found a perfect partner. t’s great to be official technical partners with a team that has such a commitment to innovative new ideas.”

A breathless Muddle can be heard talking about the benefits of the Flaér system on the Spokesmen podcast.