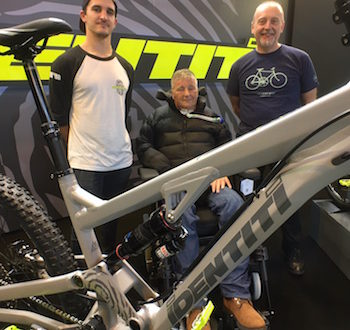 Michael Bonney has been working with Ison Distribution on the relaunch of the firm’s house-brand, Identiti. Bonney is lead consultant on the Mettle, an enduro/trail bike equipped with Rockshox Metric suspension.

"We’ve been using Michael as a sounding board for the relaunch," said Ison Distribution MD Lloyd Townsend. "He’s a mine of information; he knows the industry inside out."

Bonney started working with Ison in May last year, and the first fruits of the partnership can be seen on the Identiti stand at the Cycle Show at the Birmingham NEC. The bikes will ship in Spring 2017 – the frames will retail for £1500 with shock only.

Design for the three-bike Mettle range has been done in-house, with manufacturing in Taiwan. Identiti brand manager Pat Campbell-Jenner – a former 4x champion – is in charge of taking Mettle to market.

Identiti was created fifteen years ago but has been out of the marketplace for the last four years. Townsend said the brand will be IBD-only, and he is looking to open trade accounts.

Bonney was for many years the brand manager at Orange but on March 3rd 2013 his life changed – he fell from his road bike during the Eden Valley Epic sportive, landing on his spine.

Days after the crash Bonney said:"15 degrees either side and I’d’ve broken my collarbone." Instead, he smashed his C3 vertebrae, severing his spinal cord. He cannot feel or control his limbs and, due to loss of diaphragm control, will always have his breathing done by a ventilator.

"Life is dangerous. You can fall when getting out of the shower; I fell off my bike."

From the Identiti stand at the Cycle Show Bonney said:

"It has been personally challenging to work on the Mettle. I can make Skype calls but I struggle to type, and I can’t just fly to Taiwan to sort out problems like I used to be able to do."

Bonney added: "But it’s brilliant to be back working in the industry."

Ison Distribution has created a limited-edition Identiti road bike, and it has been placed on eBay to raise money for Bonney’s charity, Ride for Michael.