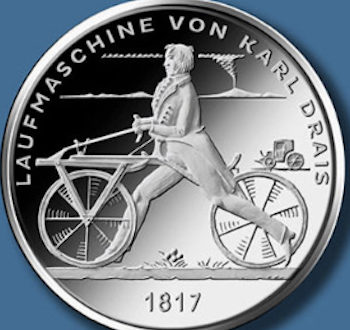 Bicycle’s bicentenary to be celebrated in Germany with €20 coin

Germany is to celebrate 2017’s bicentenary of the bicycle with the issuing of a twenty Euro coin featuring the Laufmaschine, the "running machine" that fifty years later started to morph into the bike as we know it. The Laufmaschine – or draisine – was invented by Baron Karl von Drais of Mannheim, Germany, in 1817.

Drais was a civil servant who created his machine as a horse substitute. In 1815, dust from the eruption of Mount Tambora in Indonesia covered the Northern Hemisphere causing the so-called "year without a summer" of 1816, which led to famines in Europe and beyond in 1817. A shortage of oats in Germany forced the slaughter of many horses. These themes are on the €20 coin, which will be released in July next year.

The German finance ministry had run a competition to decide on the coin’s design, and this was judged by, among others, the eminent cycle-historian Professor Dr. Hans-Erhard Lessing of Koblenz.