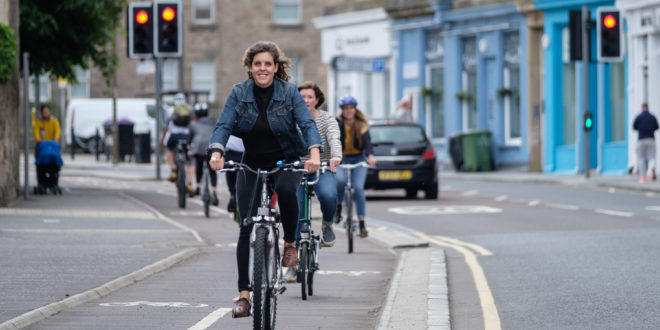 Almost three-quarters of women living in seven major UK cities never cycle for local journeys, finds a new report. However, over two-thirds of women asked said their city would be a better place to live and work if more people cycled.

Women: reducing the gender gap, published today by Sustrans, details women’s travel habits, views and attitudes towards cycling. The report, which is part of the Bike Life project, is based on an ICM independent survey of over 7,700 residents living in Belfast, Birmingham, Bristol, Cardiff, Edinburgh, Newcastle and Greater Manchester.

Almost a third of women asked who currently do not cycle say they would like to start riding. 76 per cent of women who already cycle or want to start would find separated cycleways very helpful to cycle more.

Xavier Brice, CEO at Sustrans, said: “A city that has a diverse and inclusive population of people riding a bike is a city for everyone. Cycling can play a vital role in improving health, whilst ensuring that jobs, services and communities are accessible. 51 per cent of the UK population is female, yet most of our cities are failing to design roads and streets for women to cycle.

“Evidence from the UK and beyond shows that when dedicated space for riding a bike is provided, alongside engagement programmes, the gender gap in cycling can be eliminated.

“Governments at all levels need to listen to women’s voices and invest in a network of dedicated cycling routes and training so that everyone feels comfortable and confident to ride a bicycle, regardless of gender, age and disability.”

Dr. Rachel Aldred, Reader in Transport, Westminster University, said: “We know there is substantial demand for cycling infrastructure among women and other currently under-represented groups. In the Netherlands, women cycle a higher proportion of journeys than men do, showing that a good cycling environment works for both women’s and men’s trips."

She added: “This report by Sustrans highlights the need for inclusive policy and planning, including catering for a range of different cycleable trips: not only the commute, but also trips to school, or to the shops. Women too often have limited mobility: they’re less likely than men to have access to cars and have on average lower incomes, so struggle to pay for transport more often.

"Enabling women to cycle can open up opportunities and help make our society more gender equal and inclusive.”

The report is part of Bike Life, a Copenhagen-inspired assessment of cycling levels and public opinion which is published every two years to inform policy and investment.