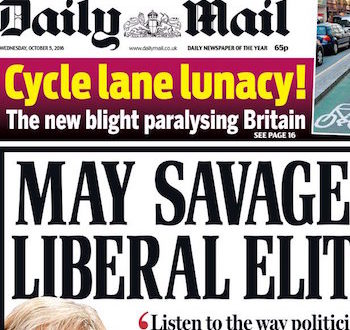 Back in December 2015 Lord Lawson claimed that the installation of a few short stretches of protected cycleways in the UK capital was "doing more damage to London than almost anything since the Blitz". Yes, the Blitz – those nightly bombing raids that razed much of London. When an otherwise sensible journalist, in all seriousness, uses this Lord Lawson quote you know you’re in for a rough ride.

The piece is headlined: "Cycle lanes lunacy!" and claims that "more and more are being built across Britain," adding that "the maddest thing of all [is] they’re often EMPTY."

Complaining about the cycleway on London’s Embankment Rawstorne writes that: "Traffic has been brought to a virtual standstill" ignoring the fact that the Embankment has long been jammed with motor traffic. The cycleway along the Embankment replaced not a travel lane but space set aside for coach parking.

Why is London building cycleways, and why are so many people getting on bikes in London? The Daily Mail gives a clue: "Traffic delays are up, while average vehicle speeds in Central London have fallen to 7.4mph — slower than a horse-drawn carriage in the 18th century." This drop in average speeds is caused by lots of extra traffic trying to squeeze through already congested London. If more people cycled, congestion would decrease.

It’s faster to cycle in London than drive, and it’s the same for many cities. Look at Paris, for instance. What getaway vehicles did the Kim Kardashian robbers use? Bicycles, as reported elsewhere in today’s Daily Mail.

But the "cycle lane lunacy" isn’t just confined to London, claims Rawstorne. "From Cambridge to Cornwall, lanes are being marked off for bicycles, and residential streets are being turned into rat runs by desperate motorists looking for a way past the jams," he claims.

And there’s the nub. In the Mail worldview people in cars are "normal"; people on bicycles are not normal.

"When I speak to motorists stuck in a jam beside a new cycle lane to the south of London’s Blackfriars Bridge," claims Rawstorne, "one of their frustrations is that while the lanes may be busy with bikes during rush-hour, they can be almost empty at other times."

The lanes are incredibly busy during peak periods. According to Transport for London, 70 percent of the traffic on Blackfriars Bridge in rush hour is made up of people on bikes. 70 percent! It would be lunacy NOT to cater for this level of demand.

Perhaps the Daily Mail will do a report on how many of Britain’s roads are empty outside of peak hours? Here’s one I photographed near Dover and another in Gateshead. Empty! Rip ’em out!

"With congestion set to get worse," concludes the Daily Mail, "the war of the cycle lanes has only just begun."

Clearly, with Brexit out of the way and immigration set to be restricted the Daily Mail needs to find new things to hate, and it’s happened upon people on bikes.

Pic of lots of London cyclists is by @londonneur