Hutchinson, the French manufacturer of bicycle tyres, has launched a new line at the Evo Bike Park in France.

The Griffus Line, named after its new gravity tyre, was opened during the yearly Evo Jam Session on 21st September.

“We looked for a spot in the bike park with enough downhill parts but also room for very big jumps. We really wanted to have one big jump at the beginning, two huge jumps in the middle and one tricks jump at the end. We designed the rest of the line around this. The goal is to have a maximum of air time. It’s a mix of speed, huge jumps and tricks,” said Romain Baghe, Evo Bike Park.

“We wanted a drop at the beginning and then there was some room left so we built a small speed jump just before the wooden kicker. The middle of the Griffus Line is the ‘flowy section’. We wanted something cool and technical, not too steep there. As we love new stuff and as you can’t find a lot of them yet, we created an on/off. Then after the turn, it’s full speed to jump the huge bumps: first one is 19 metres and right after a 14-metre long one. The Griffus Line ends up with a last kicker, to finish with some sweet tricks.”

The Griffus Line will be opened for pro riders during various events at the Evo Bike Park. 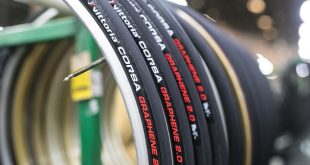