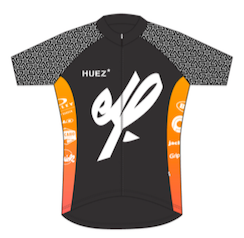 Huez* will launch the partnership at the Berlin Bike show on March 3rd 2017, showcasing the Huez*/ ELF skin suit and training kit which the team will be wearing throughout the season.

The ELF team will be joining Huez* at the show along with participating in the Rad Race Last Man Standing on March 4th. The team will be racing on specifically designed Crit bikes made by London frame builder Quirk Cycles.

Through this bold collaboration with Huez*, East London Fixed have been able to launch their first ever women’s team for the 2017 Crit season.

“The fixed gear scene has been growing and building momentum around the world and since I saw my first race I was captivated. It brings the right mix of energy, speed and thrill to cycling which other cycling spectator sports lack,” said Huez* co-founder Lorenzo Curci.

“Unlike other sports it is incredibly inclusive allowing couriers, amateurs and semi-professionals all to compete against one another. The East London Fixed team encapsulate this ethos, bringing together a team from all walks of life to enjoy riding and racing across the world.”

Huez* – which launched in 2014 – is a creator of high-quality cycling apparel. It speaks to both competitive road racers and everyday city cyclist with pieces that are designed to inspire riders, whilst incorporating the latest in fabric and construction technology into its designs.