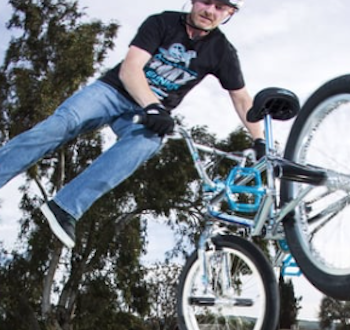 Haro brand manager John Buultjen is the inspiration for a forthcoming Hollywood movie and an autobiography. Both are called "Ride". The movie is due out in the US next month and in the UK in 2018; the book is available in the US and UK in mid-November.

Buultjen was inspired to start BMXing after watching E.T., having been taken to see Spielberg’s blockbuster by his black foster father. Much of the movie and the book revolves around Buultjen’s tough upbringing on a Glaswegian council estate. Raised by a violent, white supremacist father, Buultjen had to face up to his racism, if he was to make a success of living with his foster family.

Before being adopted by a mixed-race couple Buultjen had slept rough to escape his birth-father’s beatings and was later placed in a children’s home by his mother.

He later emigrated to Australia where he became a leading BMX racer (and also starred in Neighbours). With his winnings and TV appearance fees he built up a collection of Haro bikes, including many from the 1980s, and it was this dedication to the brand that landed him the job of Haro’s global brand manager, based in California.

Buultjen was also the founder of BMX brand Pilgrim.

Ride, the book, was ghostwritten by journalist Chris Sweeney, and includes family murders, hatred, sexual abuse – and how he rose above it all to land a dream job.

Upon hearing Buultjen life story – aged three he was thrown into a fire by his father, and was raised as a "little racist kid" before having his life turned around by his foster parents – Afshar suggested the Hollywood biopic.

If the movie is a success it could boost bike sales.

Ride – BMX Glory – Against All the Odds will be published by Pitch Publishing on 10th November.

Share
Previous Brother UK to support winners of the 2017 UK Women’s Team Series
Next Want to make a difference to cycling in Wales? Here’s how