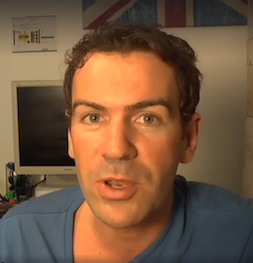 The video, which has now been deleted from social media channels, sees Nash dressed in a balaclava and camouflage, apparently mocking religious extremist group Daseh – better known as ISIS.

The video, which featured flags depicting the terrorist groups imagery, as well as the words ‘Daesh Halal’, commented on the group’s use of oil to fund terrorism activity, but was branded as ‘insensitive’ and ‘offensive’ by viewers.

“It’s supposed to make a point,” commented the company in a Facebook comment. “Daesh rely on petroleum products we buy in the UK. Sorry if insulting Daesh offended you, or you watched it without sound and didn’t hear the words. Daesh should be mocked, talked about, along with oil use and the consequences.”

Following the negative reaction, a one minute and a half apology video was posted on the page, in which Nash commented: “It was originally intended to poke fun at the bad guys and raise some important issues. Insitead, it looked a little too realistic and too close to home. I can see why people were offended and I apologise for that.

Running Greenoil is like David versus Goliath. We’ve got some huge competitors with huge marketing budgets, and we can’t match that, which is why these kinds of videos can be effective. I appreciate that this one wasn’t. I hope to have your forgiveness; I hope you can all remember that we’re on the same side.”