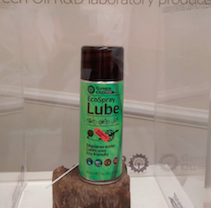 The Green Oil EcoSpray Lube prototype was revealed at Core Bike 2017 on the i-Ride stand.

Green Oil is finally ready to scale up production and is seeking help through Kickstarter.

The spray lube is a water displacer, a lubricant and comes with a straw fitting which is designed to lubricate brake levers and other difficult to reach moving parts.

The brand states that the lube was created as the result of constant requests by a number of environmentally conscious bike shops in the Green Oil distribution network.

“Green Oil EcoSpray Lube has been a long time in the making. Simply, people asked for it. It’s an important step to stop people breathing in PTFE, in bike shops and cycling cafés, which often smell like the products they use,” said Green Oil UK director Simon Nash.

Following in the footsteps of successful Kickstarter campaigns by brands such as Hiplok, Green oil has teamed up with distributor i-Ride to offer bike shop trade deals through the Kickstarter page.