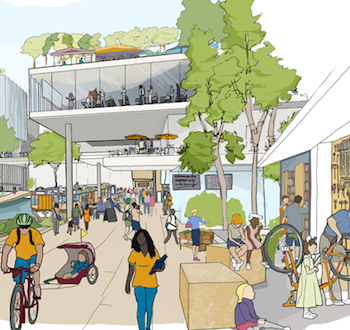 Google’s urban-innovation outfit Sidewalk Labs has today signed a deal with Toronto to trial a future-cities concept that majors on the public realm. Cars are out, bikes are in. In one of the project’s main illustrations there’s also an open-to-the-street bicycle workshop.

"Growing cities face many challenges," says the Sidewalk Labs website. "So we’re creating a new type of place to accelerate urban innovation and serve as a beacon for cities around the world."

And Google is very much imagining the cities of the future operating with almost no privately-owned cars. Instead there will be a "mobility system that is safer and more convenient than the private car at much lower cost." Think walking, public transport (in futuristic pods, natch) and cycling.

Sidewalk Labs, a division of Google’s parent company Alphabet Inc., has signed a development deal with Waterfront Toronto to create Quayside, a 12-acre district that is expected to be just the start of Google’s involvement with the area.

Quayside would be a "smart city", a test bed for new tech and modern urbanism.

A 220-page document from Sidewalk Labs states that private cars would be banned from Quayside. Instead there would be a mix of autonomous cars, freight robots hidden away in tunnels and bicycles.

Sidewalk Labs CEO Daniel Doctoroff said that "by leveraging technology and combining it with really smart, people-centric urban planning, we could have really dramatic impacts on quality of life."

Sidewalk plans to create a people-friendly city district, including creating narrow streets that privilege the pedestrian and which offer "an intimate human scale."

On the Sidewalk blog historian and author Eric Jaffe – who is now the company’s editorial director – muses over the "15 innovations that shaped the city." Alongside electric motors and other technolgies Jaffe chooses the bicycle, the 19th century technology that evolved alongside motor cars.

"After bursting onto the scene in the late 19th century as a great new form of personal transportation, the bike gave rise to the Good Roads Movement, which by urging better road creation ironically made it easier for cars to conquer city streets. Only today, as cities prioritize bike infrastructure and embrace bike-share technology, has cycling started to fulfill its initial hopes of mobility freedom."

Share
Previous In need of a friend? Hop on the saddle, says British Cycling
Next Havebike acquires Ultimate Bikes