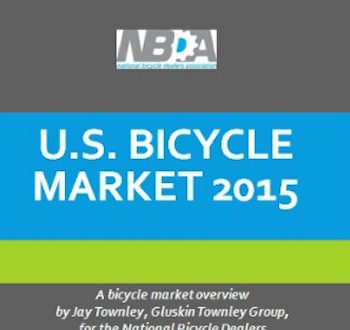 For the thirteenth consecutive year the National Bicycle Dealers Association’s US Bicycle Market Overview Report will be compiled by the Gluskin Townley Group.

“Jay Townley has been researching and writing the US Bicycle Market Overview reports for the NBDA since we formed the company in 2004, and with this renewal of the engagement he will continue for the thirteenth consecutive year."

NBDA president Todd Grant said: “I reviewed previous year’s reports and had discussions with GTG and Jay about adding another source of bike shop channel statistics and I think we can look forward to an even more complete market overview report for the 2016 season so we will have clearer insights into what happened and what bike shops and suppliers can do to make 2017 a better and hopefully more profitable year."

The US Bicycle Market Overview Report is dependent on the availability of twelve-month year-to-date bicycle import and export data from the US Department of Commerce, and also release of Bicycle Riding Participation data from the National Sporting Goods Association.

“We expect the commerce department data will be available, as it is every year, in mid-to late March and the NSGA top-line data in late March or early April of next year, so all of the other sections will be prepared so we can complete the 2016 bicycle market overview report as early in April 2017 as possible,” said Townley.

The PDF report costs $199 for association members and $299 for non-members.

"Every year we get quite a few inquiries and orders from venture capital firms, banks and other types of investors and financial institutions who are interested in this annual report,” said Fred Clements, NBDA Vice President.