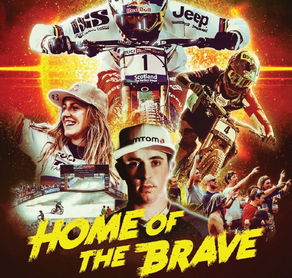 Organisers of the Fort William Mountain Bike World Cup have unveiled a new look to promote this year’s gravity action in the Scottish Highlands on June 3rd and 4th.

Rare Management – the firm behind the multi-award winning event which scooped the Best Downhill World Cup award last year from the UCI – has released the designs behind its new Home of the Brave advertising campaign featuring world champions Danny Hart and Rachel Atherton.

The theme for this year’s Fort William Mountain Bike World Cup and BUFF 4X Pro Tour is inspired by highlighting Fort William as the home event for the reigning UCI World Champions, Danny Hart and Rachel Atherton. The identity will feature across all marketing materials to promote the event including posters and event merchandise, as well as online via a re-launched website and social media channels.

Ticket sales for the 2017 event have already seen an increase compared to the same time last year, with a 15 per cent rise in the number of early bird tickets sold in December.

Mike Jardine from Rare Management said: “We’ve got the World Champions Danny and Rachel leading the home charge in Fort William this year; the chance for British winners have never been better. We want the Home of the Brave campaign to reflect the prestige of the top British riders and the excitement of the weekend on the slopes of Aonoch Mor – one of the most iconic venues in the world.

“Since launching tickets for this year’s event, we’ve had an incredible response from fans around the world and it’s pleasing to hear that so many are looking to join us again for what will be another unforgettable mountain bike experience for all the family.”

To purchase tickets, visit the Fort William website here, where you can also find details about the event.