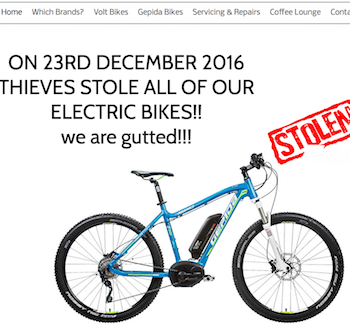 The Bicycle Den of Hebden Bridge was damaged in last year’s Boxing Day floods, and after a break-in just before Christmas this year may close permanently. The canalside shop was targetted by thieves on 23rd December – five e-bikes were stolen.

Co-owner and mechanic Toby Rainland said: "Return of these bikes would enable me to continue with my modest business."

She appealed to the thieves to leave the bikes, and notify her or the police because without keys or chargers the bikes will "worthless", and added: "I will be happy to let 2016 go, as it’s been a devasting year for many reasons."

Three of the stolen bikes are distinctive: a blue Gepida Asgard 15” (the only one in the UK), a black 17" Gepida Asgard, and an orange Volt Metro (one of only ten in the UK).

In a posting to the Calder Valley Flood Support Group on Facebook Rainland provided CCTV images of the thieves.

Rainland operates the shop with her wife Stella Bird. The shop is usually closed between December and March, but may now not open as a bike retail business.

"We will be reopening as usual at the end of March even if it’s just the Coffee Lounge," said Rainland.