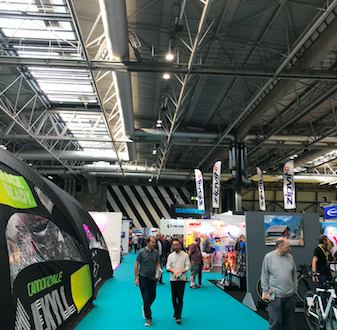 Five products we saw at the Cycle Show 2017

The Cycle Show took place once again from September 21st to the 24th at the Birmingham NEC. Along with an action-packed trade day and a host of extra-curricular activities for attendees to sink their teeth into, the show hosted a list of over 250 brands and exhibitors including Canyon, Giro, Oxford, Paligap and Batribike.

One of the most popular draws of the week had to be the impressive Bosch e-bike pump track. Built by notable UK track builder Kye Forte, the towering track was constructed from over 400 tons of earth along with wooden banked corners and moguls to create not only a hugely entertaining circuit, but also a bridge and tunnel to truly put the electric engines through their paces. A fleet of e-bikes were on hand and ready for the masses, who jumped at the chance for a ride.

As we may have mentioned just a few times, the first day of the Cycle Show 2017 was the bikebiz sponsored trade day. Along with giving dealers the breathing room to properly take in the latest generation of products, the trade day also packed in an impressive lineup of speakers, each of which imparted knowledge on EPOS, store layout, customer engagement and employee satisfaction to the crowds. One such speaker was retail consultant Mark O’Dolan, who discussed the benefits of keeping your employees motivated, and shared his top tips for increasing sales.

The Cycle Show was definitely one of the major events in the cycling calendar, but if you couldn’t make it don’t despair. We’ve posted a massive gallery of images from the show and below, you can find a selection of five products that were on display that we think you should hear about.

Tifosi Mons
Along with a respectable range of aesthetically stunning road bikes, Tifosi upped the anti at the Cycle Show this year by introducing the Mons full (and we mean full) carbon model. The complete bike features carbon in just about every place possible, and is officially ISO tested. As a complete build, the bike weighs just 4.6kg, making it the lightest production bike in the world.

Canyon Ultimate CF SLX Kraftwerk
One of the most eye-catching bicycle designs on show was the striking Canyon collaboration with iconic German electronic band Kraftwerk. The limited edition run of 21 bikes feature a design created by Kraftwerk founding member Ralf Hütter which he feels captures the essence of the band. The brand reportedly confirmed that due to its use of bold geometric lines, the design was one of the most complex ever applied to a Canyon bike. Each reflective strip was hand cut and laid, taking around seven hours per model.

Tabor Saddles
Since 1965, Tabor has been hand crafting heavy duty bicycle saddles in Agueda, Portugal. The brand’s signature models feature vintage-styled coil-spring designs topped with molded leather, and are available in a range of colours, as well as the classic brown and black. Having expanded in recent years, the range now also includes quality leather messenger bags, backpacks and bar grips.

Hummingbird Folding Bikes
Designed and manufactured in Britain, the Hummingbird folding bike aims to solve one of the central gripes commuters and other folding bike users have with the format – the weight. Due to the use of carbon when designing the frame, the bike weighs just 6.9kg, making it supposedly the lightest folding bike in the world. It folds in the rear triangle and the handlebar stem, whilst a quick release on the seat allows the seat post to more than half in length, creating a far more user-friendly storage option in what the brand claims is five seconds.

Helmetor
Whereas countless hours have undoubtedly been invested in creating smart and handy storage solutions for bicycles, there are very few truly innovative storage options on the market for helmets – regardless of their bulky size and awkward shape. This is something that brothers Tim and Jonnie McCrea chose to rectify with the creation of the Helmetor unit. “We were just looking to make something simple and effective,” commented the creators at the show. “After much trial and error, we came up with the current design.” The device essentially utilizes a unique shape to present various ways to store a helmet. It can be attached to a wall, or even strapped to the bike for safe storage.