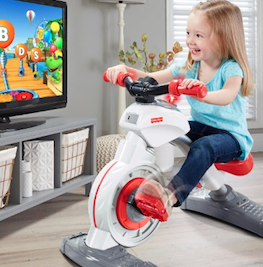 Iconic toy maker Fisher-Price has announced the release of a new turbo-trainer developed specifically for children.

The bike – which will retail at $150.00 in the US – comes with a free specially designed app, whilst others such as a Spongebob Squarepants themed game will retail at around $4.99.

The included game is a mathematics, science and social studies themed adventure, which the child can interact with via the built-in Bluetooth connection.

It’s not currently confirmed just how interactive the unit will be, but early reports suggest that it will pair with devices such as the Apple TV, Android enabled devices and smart phones.

Much like the Zwift system, the unit is capable of corresponding with the child’s pace, and will pause when the child stops pedalling. This makes it possible to interact with digital environments and on-screen tasks.

The bike has a recommended age range of three to six years, and will be available within the next year.