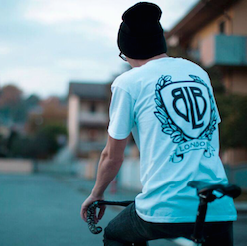 Having witnessed the first signs of fixie culture on the streets of Shoreditch, Bethnal Green and Dalston, the couple decided the time was right to invest in the local area and open London’s first fixie-specific bike shop.

“We moved in to the area before Shoreditch became such a hub of youth culture and creativity; we were probably one of the first shops to cater to that crowd,” comments Buchwald, as we sit by the busy counter of the shop, surrounded by a grotto of frames, hubs and tools. As we discuss the bikes, it’s clear to see why fixed-gear riding struck such a chord with young people in the area. The bikes are simple and easy to fix. They also roll with ease over London’s primarily flat streets, upon which gears are simply not necessary.

The bikes also provided a canvas for a generation intent on making their mark in creative and colourful ways. “Fixies were simply what we were personally interested in riding; there’s very little to go wrong on them – plus they look fantastic. You can customise them like you would a full race bike, but the parts are cheaper and more functional.” The shop immediately saw the benefits of Hackney’s creative boom. Customers from all over London poured to the regenerated area to revel in the independent boutiques, pop-up bars and eateries; at the forefront of the new cultural hub was Brick Lane Bikes.

“We knew from the beginning that location was going to be key, and we knew Shoreditch [was right[ because that’s where we used to hang out. We actually had a stall in the market selling bike parts – this is where we knew cycling culture was thriving and growing, even before the boom. From day one there was a demand in this area for the shop. People took to the idea almost immediately; it really wasn’t a struggle to get people through the door. We carried such beautiful and hard-to-find parts that people made the shop a destination.”

Brick Lane Bikes quickly became known for its treasure trove of rare parts, a reputation that it enjoys to this day. Far from a conscious decision, this shift towards independent and vintage suppliers came as just another stage in the organic development of the shop. “Originally, we just couldn’t get parts by mainstream retailers. Spitalifields was about to open and there was an Evans and a Cycle Surgery in the market, so a lot of the big distributors told us that we couldn’t get parts from them because we were too close to those giant chain stores.”

This frustrating blow pushed the owners to source components outside of the conventional suppliers – they discovered that their target consumers felt more inclined toward the alternatives anyway. “A lot of the fixie market is about aesthetics and representing yourself through the designs on your bike. People don’t want big branding and huge logos all over their rides,” says Buchwald, pointing to a particularly colourful rim that is hanging behind the counter. “They want beautiful, customised rides and people still come here to get them.“

In its second year of trading, the shop found itself with a massive following and a need for parts that just didn’t exist on the market. Instead of searching for a potentially unsustainable supplier further afield, Buchwald and Milewski decided to start creating parts themselves under the BLB moniker. “We quickly found that we’d made a name for ourselves in fixed-gear circles. We started getting messages from shops in places like Berlin and Paris asking how they could stock our parts. We decided that if we were going to produce parts, we might as well sell them to other shops and help the scene grow in Europe.”

After a year of packaging and shipping products out of the shop’s basement, the success of the BLB range grew too much to handle in-house. After much deliberation, the owners made the controversial decision to remain a completely independent brand; distribution company Big Mama was created and the shop continued to expand the range as demand grew. “We sat down with some of the companies that we were working with and decided to do it ourselves. It got so popular that we had to move Big Mama to a warehouse space elsewhere in London.

Redevelopment has become an issue for many residents in Hackney. The independent boutiques that once filled the streets are slowly being replaced with high-street chains and luxury shopping outlets. But Buchwald doesn’t see this as a damning sentence for Brick Lane Bikes. “I don’t think it’s a big threat to us. What it is doing, however, is change the area into a more mainstream destination; the kind of bikes that we sell are having to progress with that change. Hackney is still a big hub of cycling. I don’t think the community has left, I think it’s just widened slightly.”

I’m keen to ask Buchwald whether the shift in buying habits has affected her passion for the bikes. “Custom builds are still a core element of our shop. Does that tend to be the outcome of most sales? I don’t think so anymore. We’re selling more complete bikes than ever and we have to accept that.”

As we sit and talk in the main space, it seems evident that despite all the changes that the business has seen both internally and externally, the shop floor has remained essentially untouched. “I guess it speaks volumes to the accidental nature of our growth,” says Buchwald. “The stock may have changed, but we’re literally the same shop we’ve always been. We’ve never even redecorated!”

With so much history behind the name and a flourishing distribution business taking up more and more of Buchwald’s time, where does she see Brick Lane Bikes in 12 months? “We have no plans to expand, but we never have and look where we are now! We’ve made it ten years without having to compromise on who we are, I think we’ll still be here in another ten years.” 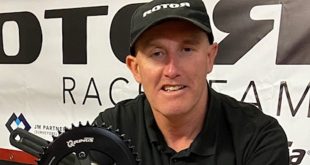