The new boss of the St Albans-based distributor is a keen cyclist and comes from senior roles in the distribution sector – in the home entertainment and mobile phone markets – at Total Home Entertainment and 20:20 Mobile respectively.

Under Browning’s stewardship, both companies grew substantially before being sold to investment groups.

The cycle market attracted Browning, not least for the opportunities to develop the market – and Fisher. He told BikeBiz: “Cycling is a buoyant sector. There’s growth and there’s government investment with cycle routes, etc. Cycling’s contribution to the economy is impressive and there’s plenty of interest in it.

“There are multiple customers and multiple brands, so you need aggregation – there’s need for distributors.”

“There are challenges for IBDs of course, but they have been very resilient and there are no bad debts – that’s a good sign for the bike shops.

“Speaking as a consumer, there’s no way I would go and buy a bike off the internet. I want to buy it in person, especially if you are paying a few grand.

“There’s a healthy foundation for the independent bike dealer base.”

Browning, alongside sales and marketing director Mike Cook, revealed that Fisher has spent the last six months tackling issues in the supply chain and both were keen to stress the distributor is raising its game. Cook told BikeBiz: “There have been availability issues, but we’ve been doing everything we can and have improved significantly in the last three months.

“We needed to raise our service, in terms of price, support, availability, etc. We’re now much stronger on those over the last three months but we’re not where we want it to be yet.”

The firm has invested in the fundamentals for growth and long-term gain, including a new IT system and a fresh B2B platform. Feedback from dealers has been good since the B2B launched in November, Cook told BikeBiz, with a positive response and increased sales.

Availability on core lines has grown too and a new head of warehouse has been put in place on an interim basis while new systems are refined, with accuracy and speed of picking increased.

‘Madison is the benchmark’
With Browning at the helm, Fisher has growth in its sights.

Mike Cook explained: "Madison is the benchmark. It’s about how to make sure that in all the places you work with IBDs that you are doing it well. Madison is doing it very well and everyone else is playing catch up, it seems to me.

“All the points where our customer service touches IBDs have to be good experiences – retailers have a lot of alternatives so you have to make it as easy as possible for them to deal with you. You need to be as good, if not better, than the rest and you need product and you need portfolio.

“We think that’s a strength at Fisher, we have great brands, but there are three or four new categories needed. We’re not in footwear for example, that’s pretty obvious. We also want to strengthen categories too, maybe with one or two brands in particular areas.”

“Clothing is great for us with Santini and Troy Lee Designs, but we feel that they those two can be even bigger. For instance, clothing is a challenge to merchandise and we haven’t done much to help bike dealers with that. Online retail has had a field day with clothing – probably around one third of Wiggle’s sales are through clothing.”

Browning expanded on the point: “Shopping for clothes is a 3D ‘touchy feely’ experience, so why is online doing so well here?”

As an example, Christmas is another area where Browning feels more can be done to help independent shops. He said: “There’s a lack of gifting in the sector. At Christmas there are gifts for golf players…even snooker and darts fans. Where are those gifts for cyclists?”

Cook added: “Christmas is a challenge, you only have to go onto the trade forums and see everyone asking ‘are you quieter than last year too?’

“We need to work harder as a trade to make Christmas work. In terms of bricks and mortar it should be bigger than it is.”

More immediately, however, the duo ram home the point that Fisher is actively looking to make it simpler for IBDs to work with them.

Browning revealed: “We’re reviewing all our credit limits with a view to putting them up. In the past we’ve been quite conservative with dealers.

“This is a genuine push – we’re asking ourselves ‘how do we become easier and better to deal with for our customers?’ That is our focus.” 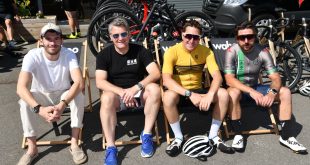