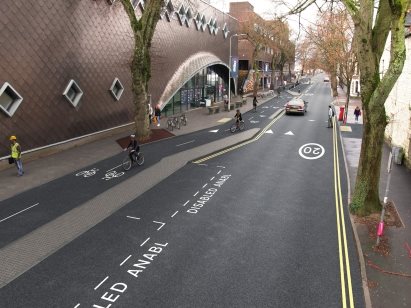 First separated cycleway to be built in Cardiff

Work on the first separated cycleway in Cardiff will begin on Senghennydd Road on 18th March.

This will be the first phase of five proposed separated cycleways in Cardiff, as part of the council’s plan to improve cycling infrastructure in the Welsh Capital.

The five proposed cycleways could make up 13 kilometres of designated cycling space which would run through nine wards on the following routes: St Andrew’s Crescent through to Heath High Level, Dumfries Place to Broadway in Adamsdown, Cardiff Bay to Smart Way, Sophia Gardens through to Llandaff Village and the City Centre through to Ely Bridge. Provision for cycling through dedicated cycleways will also be delivered in the city centre.

Councillor Caro Wild, cabinet member for strategic planning and transport, said: “We want to make Cardiff the best cycling city in the UK and our long term vision is to extend the cycleways further into different communities and also connect the strategic sites identified in the LDP, as well as potentially linking with neighbouring authorities.

“In the main, the new routes will be separated from other traffic on the road, making cycling safer, faster and a more comfortable experience which will make cycling a more attractive option for both residents and visitors. Safety is a primary concern for those considering whether to cycle, especially for women or children, a fact that has been recently identified in a recent Sustrans report.

“The success of the nextbike scheme demonstrates how popular cycling can be in Cardiff. Now we are focusing on improving the infrastructure and we believe that the number of people who choose to cycle in the city will significantly increase when the cycleways have been built.”

Following public consultation in April 2018, the first phase of the first route will run from the top of Senghennydd Road by the Woodville Pub, down past the University Union and the Sherman Theatre, onto St Andrew’s Place before turning left onto St Andrew’s Crescent. This work is estimated to be completed by October 2019. Amendments to the scheme have been made following the public consultation and this work will also include resurfacing the carriageway for motor vehicles, as well as making improvements to the pavements.

Public consultation has now started on the first phase of route three, which will remodel the existing cycle path and footway on Lloyd George Avenue.