The FCA recently announced increases in its base rate fees that will have an ‘unfavourable effect’, particularly on smaller independent retailers, said the ACT.

However, retail finance remains the ‘most powerful sales tool available for IBDs’, the ACT added, and correctly used these extra costs can ‘easily be negated’.

Applications made via the ACT’s Ride it away scheme, even with current stock issues, are now back to pre-COVID levels and the association is experiencing similar growth patterns as seen prior to the pandemic.

Trends are proving that when customers want to purchase a higher-ticket item, retail finance is an attractive payment method – in April and May 2020, 80,000 people applied for retail finance on the Ride it away scheme alone.

FCA changes
While there is currently plenty of positivity surrounding retail finance, the Financial Conduct Authority (FCA) who regulate UK retail finance, has recently released its 2021/22 business plan, which includes substantial increases to the costs paid by FCA authorised retailers. The impact of these increases is now starting to be seen by retailers as the latest invoices are being sent out.

Any business authorised by the FCA to introduce customers to regulated finance, known as limited permission secondary credit brokering, will be affected. Until now limited permission firms in the lowest fee bracket paid a base rate of £106p.a. However, the FCA has decided that small firms, who currently pay a minimum fee, should now pay an increased amount to “make a contribution to the costs of regulating them that more fully reflects the costs associated with FCA authorisation and ongoing supervision”. (FCA regulated fees and levies: rates proposals 2021/22, p.4 pt.1.8)

The new consumer credit base rate for smaller firms is £250 per year, a 135% increase of £144. According to the FCA, these revised fees for 2021/22 are “the first stage to bring greater alignment of these minimum fees with other authorised firms who currently pay a minimum fee of £1,151”. This would suggest more increases are to follow until limited permission fees match other authorisations, said the ACT.

This increase in base rate fees will have more of an impact on smaller businesses as they are less able to absorb the increase. One of the key FCA mission statements is to ensure ‘customers are treated fairly’, although this increase in cost is likely to cause many smaller businesses to cancel their authorisation and thus will be offering consumers less choice, not more, the ACT added.

There is now an online course available to get yourself and your staff properly trained on how to use retail finance effectively, resulting in increased sales and profits. Try the Retail Finance Training demo for free.

However, as part of the 2021/22 review, the FCA identified “failings included insufficient oversight of their ARs and inadequate controls over the regulated activities for which they have accepted responsibility”. Rather than taking direct action against only those Principle firms that hadn’t been regulating their ARs sufficiently, the FCA has decided to charge every Principle £250 for each AR they have.

The new £250 fee per AR will make it less feasible for Principle businesses to appoint smaller independent firms. The increased fees and oversight requirements have meant that unfortunately, the ACT’s own AR scheme has been terminated.

“We are disappointed with the FCA’s decision”
Chris Hall, ACT director, said: “The ACT undertook significant amounts of work, resource and time to create the AR service for our members, that we considered a ground-breaking service to enhance our already market-leading cycle finance product – Ride it away – which reached sales of £140 million over the last 12 months.

“We are disappointed with the FCA’s decision to penalise all Principles rather than just those who failed to provide proper oversight and would like to ensure our members are aware this is an external factor that we have no control over.

“With this in mind, I would still like to reiterate the importance of retail finance as a sales tool to cycle shops and firmly believe that is a profitable asset to businesses when used effectively.”

Why retail finance is still an asset to your business
Despite the increased FCA costs, retail finance remains the most powerful sales tool for retailers, the ACT said. In June 2021, returning customers using the ACT’s Ride it away scheme accounted for 13%, meaning that 87% were new customers using finance as an alternative payment method.

Furthermore, since January 2019, the yearly average loan amount has risen by 54%. Based on this and the evident non-availability of lower ticket bicycles, it’s obvious customers want alternative methods to pay for higher-value purchases. The ACT’s retail finance scheme is currently influencing hundreds of thousands of pounds worth of UK bicycle purchases every day.

Train your staff to deliver finance effectively
Retail Finance Training, brought to you by Indie Retail Training, is an online learning course delivering an informed insight into retail finance that can be completed anywhere, in your own time. This course is designed for all owners and employees in a business that either currently, or plans to, offer retail finance as a payment method.

The course will teach you how to legally promote and use retail finance in-store, online and in all other forms of media. As well as covering the legal details this course also aims to make sure you maximise each sale using retail finance. The cost to access the course is £150 including VAT. ACT members receive preferential pricing with up to 50% off.

Try the Retail Finance Training demo for free or find out more about the full course. 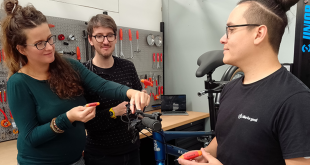