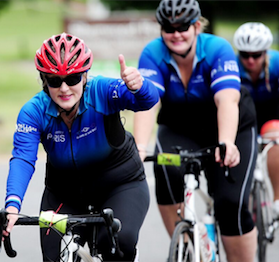 Fat Lad At The Back partner with Leeds United for fundraiser

Championship football team Leeds United is joining forces with premium cycle wear brand Fat Lad At The Back to launch an annual sportive, raising money for West Yorkshire communities still recovering from the devastating floods of 2015/16.

Starting on September 17th, 2017 and contracted as an annual event, the Leeds United Sportive, powered by Fat Lad At The Back, will start from the gates of Elland Road and proceed through the Calder Valley passing through towns and areas affected by the floods.

The routes, approximately 25, 50 and 75 miles in length, will be limited to just 1,500 entrants for 2017, though the total number of participants is expected to increase in the future. £5 of every entry fee will be donated to local flood relief charities.

Leeds United head of retail and licensing Mike Peebles said: “We approached Fat Lad At The Back because we love their ethos of supporting people to enjoy cycling and we already know that a lot of our supporters are customers of FLAB – the fact that they’re a Yorkshire-based business is even better. Leeds United want to encourage people from the stands and onto their bikes.”

Fat Lad At The Back co-founder Richard Bye said: “FLAB is a proud Yorkshire business; we’re keenly aware of what hit parts of our county in December 2015 and January 2016. We are delighted to be working with Leeds United, a major sports club with a superb, international fanbase, to raise money for those communities still affected by the impact of that devastating flooding."