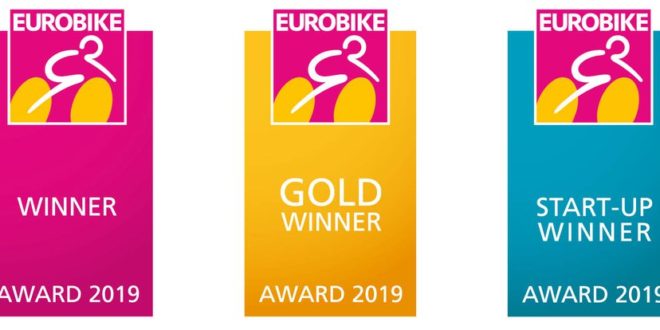 The 15th edition of the Eurobike Awards concluded yesterday, with 43 winners emerging from a competitive field of around 400 entries. This year’s winners inspired the six-strong international panel of judges with both their unique character and the consistency with which they had thought through and worked out their ideas and projects.

“There are many awards, but only very few in which the innovations for cycling are assessed by a really independent panel of judges”, said Eurobike show director Dirk Heidrich.

“Consequently, as an accolade from the leading trade fair within the industry, the Eurobike Award is one of the most important genuine yardsticks for innovation and design in the bike world – from the manufacturers, via retailers, to the end-users. This appraisal is confirmed by the number of participants, which has remained constantly high for years and justifies all our efforts.”

The biggest winner on the night was Asfalt for its LR model – a ‘puristic’ urban e-bike. The LR was the only product rewarded with both a Start-Up and Gold Award.

The judges said:  “This Swiss-made cycle makes no compromises on either quality or materials. Overall finish, attention to detail, craftsmanship of the joints and integration of the cables are all excellent. Thanks to the modular design, one of the two batteries can be removed to reduce weight for shorter trips.”

CERO One Electric Cargo Bike
The family-run company Cero Bikes is based in California, USA, and is dedicated to the task of finding transport solutions for the great challenges in our congested cities. With its convenient size and great agility, their e-cargo bike is predestined for urban transport.

Judge comments: “A compact e-cargo bike with a good carrying capacity. Clever features include the modular accessories that can be fitted to the front and rear carriers. We considered this a sturdy workhorse for everyday use. Its low centre of gravity provides stability.”

e-muli STEPS
In 2015, the brothers Jonas and Sören Gerhardt came up with the idea of developing the ideal bike for the city. After a non-motorised version, the e-muli STEPS has evolved as an e-bike for all areas of life – from the transport of children through to the shopping trip.

Judge comments:
“The new e-muli cargo bike impressed us with its clear, plain styling and the clever integration of the new Shimano drive. Utility has priority and turns this agile cargo bike into a very practical yet also most inspiring workhorse. It is also small and compact.”

Superdelite GT rohloff HS with GX option
The Darmstadt-based company Riese und Müller is one of the biggest players in the e-bike sector and puts on a very self-confident performance in the high-end sector, particularly with its full-suspension bikes.

Judge comments:
“We had great fun with this multi-talent from the luxury end of the cycling world. One of its perfectly engineered features is the extended range provided by the double battery integrated invisibly into the frame.”

Chat rickshaw transport bike
Van Raam is a company based in the Netherlands that repeatedly comes under the spotlight thanks to its well-conceived solutions in the specialist bike segment. With the Chat, the Dutch producers have built a bike that guarantees simple, safe and sustainable mobility with the assistance of others for people who are no longer able to cycle independently.

Judge comments:
“This rickshaw bike has an impressive quality of detail. We found it very easy to ride and liked its wide range of safety features, particularly the good visibility through the canopy.”

AirWinder Self-Inflating Bicycle Tire
It is almost becoming the rule rather than the exception: too little air pressure in the tyres. AirWinder, a company from the French-peaking part of Switzerland, has dedicated its efforts to eliminating this problem – with a tyre that pumps itself up automatically.

Judge comments:
“There are too many bikes on the road with excessively low air pressure. This product increases safety and saves riders even having to think about checking their tyres.”

FOX Live Valve
The American company is one of the leaders in suspension forks and shocks for mountain bikes. With its new sensor system they are aiming to raise operation of the suspension elements to an entirely new level.

Judge comments:
“A smart system that reads the terrain and makes very fast setting changes in suspension. It has been proven at the highest level. We particularly liked the added safety this brings and the fact that the rider can concentrate more on the trail – and of course have more fun.”

SRAM & RockShox AXS – technology to make life easier
SRAM from the USA is one of the world’s key component producers. It is working flat out on the challenge of combining the settings options for mountain and road bikes within one common control system.

Judge comments:
“A smoothly functioning and race-proven wireless system that has the potential to revolutionise bike design. It makes fitting components easier and has an excellent finish. To date electronic gear shifts and seat post adjustment have been integrated into the system.”

I LOCK IT e-bike
The parent company of I Lock-IT, haveltech GmbH based in the state of Brandenburg, wanted to make securing a bike more convenient. In their new product, they have come up with a clever solution for Bosch e-bikes.

Judge comments:
“Lock up by removing the display: simply remove the display when you stop off for a snack and I LOCK IT simultaneously secures the bike via the frame lock fitted to the rear wheel. A perfect anti-theft device for those short stops because many people take the display with them in any case. It’s particularly pleasing to see that the company has linked up with the market leader as its partner.”

AER 557 Adult Electric Scooter
The AER Electric Company is based in London, a city where mobility problems are more evident than almost anywhere else. And it certainly provides the perfect “test circuit” to develop an e-scooter with more functions than most others.

DiOX DWR C Zero coating
DiOX/LiquidNano was looking for a solution to make textile surfaces waterproof and dirt-repellent, without placing a burden on the environment. The British company seems to have found it in this product.

Judge comments:
“We were greatly impressed by this new fabric coating. It promises to be more durable and environment-friendly than traditional solutions. This is because it achieves its water-proofing effect through physics rather than chemical means.”

Bike Box
The founder of this South African company faced a familiar problem: she found that bike cases are huge, expensive and when you’re not actually travelling – i.e. nearly always – they take up a tremendous amount of space. The company has come up with a different solution.

Judge comments:
“This economical solution to transporting bikes provides greater protection than many alternatives at three to four times the price. The system is suitable for mountain and road bikes and can be modified to protect fragile components. It’s also very easy to store.”

TATZE Integral (crank-pedal drive unit)
The Austrian Armin Hofreiter is a former triathlete and – because he was dissatisfied with his equipment – has evolved into a pedal specialist. The Integral model represents a small revolution.

Judge comments:
“TATZE presents an interesting new approach to pedal technology, with the bearings being incorporated into the crank rather than the pedal itself. A new future trend perhaps?”