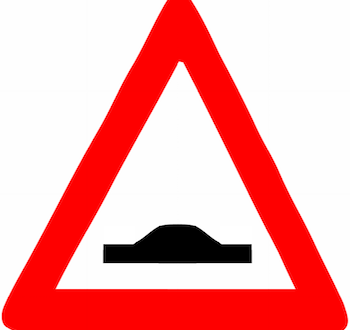 Motorists should be able to drive faster in residential areas, the government is to tell local authorities. Speed bumps should be removed so motorists can drive more smoothly and therefore emit less pollution, reports The Telegraph.

"Councils will be advised to take measures to improve the flow of traffic as part of a new clean air strategy to be unveiled later this month," suggests the newspaper, adding that "motoring organisations have urged ministers to cut pollution by reducing traffic jams and encouraging drivers to go at a steady speed rather than punishing them with stealth taxes."

Stealth taxes such as speeding fines, that is. That those motorists who don’t speed don’t get speeding tickets appears not to register with The Telegraph.

The "get rid of speed bumps" idea is part of a package of measures the government is said to be considering in order for it to comply with a High Court ruling that found its existing clean-air strategy does not meet legal requirements.

The Telegraph did not report that the two ministries were considering promoting active travel or reducing the reliance on motor transport for short journeys.

Late last year the majority of the mainstream press reported – falsely – that the National Institute for Health and Care Excellence (NICE) was lobbying to get speed bumps removed. In fact, Britain’s health watchdog had issued air-pollution guidance, urging local authorities to introduce cycleways as well as measures that will make motorists drive slower and more smoothly.

The mainstream media ignored NICE’s guidance on providing for cyclists, and fixated instead on the advice on speed bumps.

The Daily Telegraph’s front cover in December said NICE wanted local authorities to "axe speed bumps". (It didn’t: it suggested "Where physical measures are needed to reduce speed, such as humps and bumps, ensure they are designed to minimise sharp decelerations and consequent accelerations." It also said that "evidence on traffic-calming measures such as speed bumps suggested that these may increase emissions by adding to decelerations and accelerations" but that "evidence from area-wide schemes does not show increases. So where physical measures are needed to reduce road injuries they should be designed to minimise their impact on air pollution. The evidence was weak so this was a ‘consider’ recommendation.”)