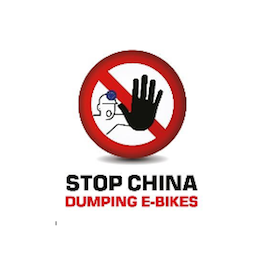 “We strongly welcome the new European Commission investigation into the dumping of Chinese e-bikes, which are flooding the EU at an alarming rate and artificially low prices. EBMA has also asked the European Commission for the immediate registration of Chinese e-bike imports, which will allow EU anti-dumping duties to be imposed retroactively, and will shortly file an anti-subsidy complaint,” commented Fioravanti.

The secretary general called on the EU for immediate action to stem the flow of dumped e-bikes from China stating: “EBMA and the EU manufacturers of bicycles, pedal assist e-bikes, and components are firm believers in free trade, but trade must also be fair. Injuring domestic producers through imports which are dumped and heavily government-subsidised is against the WTO rules. We have asked the Commission to order the registration of Chinese e-bikes as soon as possible so that the blatant disregard of trade rules by Chinese e-bike manufacturers can be stopped quickly.”

He continued, “We are confident that the Commission will make a thorough analysis and confirm the massive scale of dumping from China which is injuring EU producers and destroying sustainable manufacturing jobs, Innovation, growth and investment in Europe.”

“Our European bicycle, e-bike and components industry is one of the largest generators of green jobs in the EU, and the dumped Chinese e-bikes put at serious risk the employment of over 90.000 EU workers and 800 SMEs. We must do whatever it takes to legitimately defend our workers and our manufacturing SMEs, including our European know-how, new products and investments. It is our people and our investment in new technologies which make the European bicycle, e-bike and components industry one of the most innovative industries in the world,” pointed out Fioravanti.

“Chinese e-bike exporters, on the other hand, benefit from massive subsidies from government bodies at every level in China. Those subsidies have encouraged enormous e-bike manufacturing overcapacities, which are then dumped in the EU.”

Imports into the EU from China will have jumped from nearly zero in 2010 to more than 800,000 e-bikes in 2017. 2016 e-bike imports from China, over 430,000 units, represented 70 per cent of all e-bikes imported from outside Europe and a massive 40 per cent volume growth compared to the previous year.

“If this dumping is not stopped, China will quickly grab an e-bike monopoly in Europe. Dumped Chinese e-bikes are causing injury to European industry, which is harming the European economy and consumers worldwide. Indeed, local EU manufacturing by SMEs is the only sustainable future for the EU, both to create new green jobs and to really cut carbon and other dangerous emissions,” concluded Fioravanti.