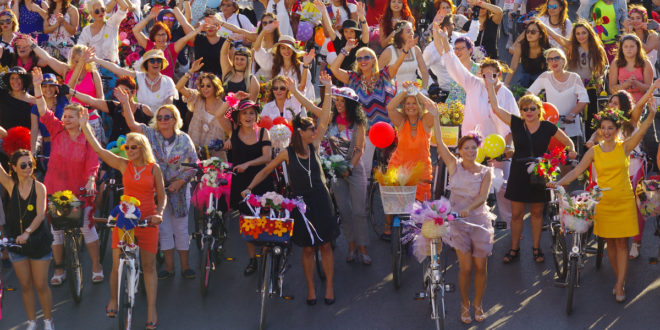 Does a “fancy” women’s ride really aid the gender gap?

The first annual “Fancy Women Bike Ride” took place in 2013 when a teacher created a Facebook event to invite her friends to come together for a bike ride one Sunday afternoon, in the hope of challenging the male-dominated world of cycling in Turkey. By 2017, it had become an international event with over 30,000 participants. This year’s event took place on 23rd September across 70 cities in Europe, including Izmir, Istanbul, Milan, Bern, Cologne and Nicosia.

The ride’s website describes it as “a reaction to the world of traditional cycling in which men tend a little too often to tell women how they should be, what they should do, how they should dress” and “is a proof that cycling is possible without lycra, without sweat, without competition, without reflective vests”.

International coordinator Pinar Pinzuti said: “The women’s bike ride is successful because the event welcomes everyone, the message is clear and it is organised by brave and independent women.”

This event aims to liberate and take back control for women who are catcalled and intimidated on Turkish streets, and it has spread around the world. The ride is not seen as a protest, but as a celebration.

Pippa Wibberley, managing director at Raleigh, of which the marketing team are 50 per cent women, said: “The intention that this should be fun is a good one. Getting involved in cycling doesn’t have to be competitive and the motivation of accessing the joy of cycling is really important to us all at Raleigh.”

Pinzuti added: “The fancy women bike ride is a call to all those women who just want to be visible on the streets, in the city, in the society. It is the opportunity to experience the streets where perfumed and colourful women replace stinky and cold cars.”

However, the bike ride had the following rules: 1) Smile, 2) Greet other people, and 3) Pose to the photographers. This is where I started to have a few issues with the nature of the ride, as these rules don’t have any relevance to cycling.

The event is described as an ‘easy’ ride for women, and the idea that the women should ‘smile’ misses the point of what the cycle should be about. Women can wear perfume, wave and smile if they wish, but putting these into the rules of a ‘fancy’ bike ride only reinforces stereotypes of how women should behave and doesn’t go so far as to challenge a male-dominated industry.

Michelle Jakeway, head of marketing at Raleigh, said: “Unfortunately this event seems to market itself as a catwalk display of women – not what cycling is really about. Everyone is uneasy with the nature of this event as it encourages women to ‘dress-up’ and ‘smile’. This only widens the gender gap between men and women further and serves to support gender bias.”

The point of a women’s bike ride should not be how you look, or how you come across in front of a camera. Riders were told they could wear whatever they liked, as long as they were ‘fancy’. I was sent some pictures of the event from last year, and in them the women were wearing dresses and heels and their bikes were decorated with flowers and balloons.

“This approach is unfortunately not uncommon,” added Raleigh’s Rachel Aylott. “Women’s ranges of bikes and apparel all seem to begin with pastels – ‘no pink, please’ is how most of us felt! Forget stilettos – where are the girls in baggies?

“We would rather the initiative work to narrow the divide between men and women – celebrating the power, passion and pride within all women – mothers, sisters, grandmas, friends – cycling united on life’s journey.”

She continued: “Organisers should celebrate diversity, not stereotype women into boxes; women can be their own champions – whatever their personal challenge, big or small. Most of us bought into the idea of a fun cycling event that gets girls and women together, but found this patronising and condescending. ‘This Girl Can’ campaign is a better example of a well-executed market campaign designed to empower women.”

‘This Girl Can’ is a celebration of active women who are doing their thing no matter how well they do it, how they look or even how red their face gets. Funded by The National Lottery and developed by Sport England, the campaign wants to help women overcome the fear of judgement that is stopping too many women and girls from joining in. There is no mention of girls and women needing to dress up, smile and pose for photos, like the fancy women bike ride.

There is no one quick approach or solution that will solve sexism for all women across the world, but the fancy women bike ride only seems to widen the gender gap between men and women. No matter how the event started, it should evolve into one that breaks down stereotypes and encourages women to cycle no matter what they look like or how they dress.

Even so, organisers said the 2018 event was a success. Pinzuti said: “The fancy women bike ride went well. The aim of the event is inspiring more women to use the bicycle in their daily commutes. There were more than 400 women in Milan, and more than 40,000 participants in 70 cities in six countries.”