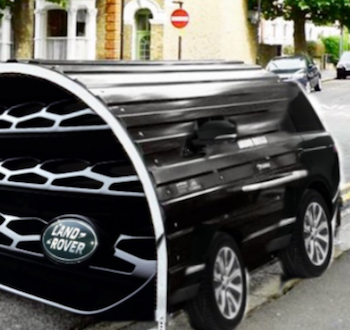 Bike blogger Danny Williams has accused Westminster City Council’s planning officers of being "utter snobs" for saying that bike-parking sheds should not be allowed streetside. Williams – one of the Evening Standard’s "1,000 most influential’ Londoners" – pointed out that the steel bike hangars are currently installed on Westminister’s council estates, but it has been recommended they should not be placed in "character" areas, which is "most of it," he said.

As Westminister City Council has no problem with the streetside disposal of other large lumps of metal – cars, that is – a number of Twitter users suggested a way out for the council: disguise the almost-car-sized steel hangars as posh Land Rovers. "ChimneyPop" mocked up an image of what such car-camouflage would look like.

Dominic Fee, from the Westminster Cycling campaign, told the newspaper: “The report makes it sound like they are these gigantic things that will dominate the street. But really they are tucked away with cars."

Planners said the area had "high quality and charm" and that the streets, despite being dotted with many parked cars, are "uncluttered."

“The proposed bicycle storage structures introduce a bulky and incongruous feature into the townscape," claim the planners, who may not have clocked that the parking hangars are, in fact, smaller than a Land Rover. While dumping cars is fine, the steel bike sheds would "de­tract from the setting of the houses."

Perfectly in keeping with the local 'character'. pic.twitter.com/GFYw7QfMq6

The difference, said the planners, was that cars can move (in fact, as numberous studies – and common sense – show cars spend much of their life parked).

“While the streets are lined by parked cars, these are of course transitory and have a very different impact on the character of the area,” said the planners’ report.

Residents on the street had asked for the cycle-parking hangars. The planning application said: “This site has been identified as a suitable location to promote cycling by domestic users, who may otherwise be discouraged by the lack of facilities available to them.”

A decision will be made by a planning committee at Westminster City Hall on Tuesday.

The hangars are made by Cyclehoop, and at 2.5m by 2m they "can store up to six bicycles and occupies only half of a parking space," says the London company.