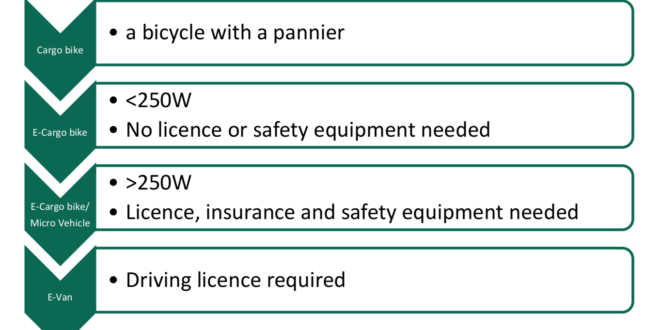 A subsidy programme for e-cargobikes may come with strings attached, BikeBiz has learned. Yesterday the government announced a £2 million funding package, parts of which could be delivered via "plug-in" style grants, as already happens for e-vans via the Office for Low Emission Vehicles. However, the government is concerned that it may be unable to offer subsidies for vehicles that are not officially registered or licensed by the DVLA.

With a growing number of electric vehicles arriving on the streets – some battery-powered quadricycles are currently classified as e-bikes even though they have four wheels – the government may create new classes of vehicles. In the future, e-cargobikes may be classified as motorised "micro vehicles" and become subject to compulsory registration, with riders required to have licences, wear helmets and have third-party insurance.

Benjamin Knowles, director of e-cargobike taxi and delivery service Pedal Me, told BikeBiz: “We believe in the need for some regulation of the sector – indeed we have our very own thorough assessment process, tracking, and nameplates on our bikes, but any reclassification as motor vehicles would seem disproportionate as e-cargobikes do not pose anywhere near the same amount of danger as motor vehicles due to lower peak speeds and lower mass."

He added that a reclassification of e-cargobikes into a motor-vehicle category "would likely hinder the growth of the fledgling e-cargo logistics industry leaving our cities motor-dominated, polluted spaces, and allowing other countries to lead the way in this field.”

A spokesperson for the Department for Transport refused to be drawn on whether a reclassification is on the cards. This is because the department’s call for evidence on "last mile" logistics only closed yesterday, with submissions yet to be evaluated.

However, the questions on the evidence call suggest that the DfT was trialling support for new classification categories.

Currently, e-cargobikes with 250W motors are classified as e-bikes.

There are different rules in Northern Ireland, but in England, Scotland and Wales electric bikes – ‘electrically assisted pedal cycles’, or EAPCs – can be ridden by anybody over 14 years old without the requirement for a licence, and e-bikes with 250W motors do not need to be registered, taxed or insured.

The government’s call for evidence discussed e-cargo bikes, micro-vehicles and e-vans, but admitted that there is "some complexity over insurance and licensing requirements for these vehicles."

(In law, bicycles are treated as "carriages" and without this classification, in force since 1888, they could not be ridden on the public highway. Cars are "motor carriages" – in other words, they are motorised vehicles that "carry" people and things.)

"If financial incentives for businesses were introduced to increase the uptake of e-cargobikes a clear definition of e-cargobikes would be required," the DfT has said, and this would include examining load capacity, weight, and power output. There is no current official classification of "micro vehicles" but in the DfT’s call for evidence, they are listed as requiring licences, insurance and helmet-use because they have motors with greater output than 250W.

As e-cargobikes are bicycles and do not need to be registered by the DVLA the government is evaluating "how purchases of e-bikes could be verified in order to qualify for financial support."

The government is also aware that four-wheel e-cargobikes are two or more times wider than bicycles and therefore cities may have to widen their cycleways in order for such quadricycles to continue operating.

However, another possible solution – and far cheaper and easier to implement – is to prohibit quadricycles from using cycleways.

In the Netherlands, two-seater 30-mph "microcars" – developed in 1995 by Waaijenberg together with the Delft University of Technology – are allowed to use cycleways.

Roads minister Jesse Norman has said: "We want the UK to explore all modes of e-cargo and emerging transport technologies for last-mile deliveries, so we can help create beautiful, livable, green and connected towns and cities."

The DfT’s call for evidence on e-cargobikes will form part of the government’s Future of Mobility Grand Challenge.

Purchases of e-vans are currently supported by OLEV grants of up to £8,000.

The DfT is currently working on a "state of the nation" report as part of the Comprehensive Spending Review due out in the autumn. It’s widely expected that the chancellor of the exchequer Phillip Hammond will reintroduce fuel duty in the autumn statement. Yesterday he told MPs that the fuel duty freeze has so far cost the Treasury £46 billion- which is double the yearly NHS spend on doctors and nurses.

Any classification of e-cargobikes in a new "micro vehicle" category may make them subject to registration fees.