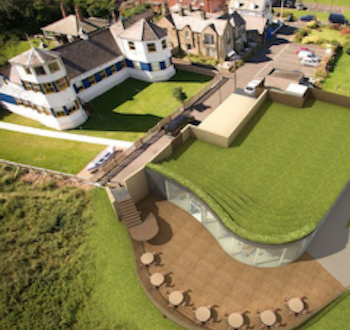 Developers have withdrawn their plans for a cycling hub business at the end of the C2C route in Tynemouth. The would-be bike shop and cafe was on the receiving end of fierce local opposition including a 3,100-name petition.

Protestors claimed that plans for the redevelopment of the Watch House Garden on the Spanish Battery would result in increased traffic and noise as well as harming the character of the area.

Project director Josh Boyle told the Evening Chronicle: “The plan has been withdrawn. We are not making any further comment at this stage.”

Bill Corrigan, chairman of the Friends group, said: “I am delighted the scheme has been withdrawn and I would like to thank all the people who have supported our campaign.

“We have said all along that we are not anti-cyclist, in fact we are pro-cyclist. All we say is that the Spanish Battery is the wrong place and the cycle hub should be developed in a location where there is commercial activity.

“We have already said we are happy to work with the council and cycling groups who are drawing up a cycling strategy for North Tyneside and we have suggested several alternatives for the location of a cycle hub in Tynemouth and at North Shields Fish Quay which is with a regeneration area.”

Brothers Josh Boyle and Mark Maitland, and their friend Gareth Reece, had planned to create a cycling hub in front of the Grade-II listed Watch House at Spanish Battery in Tynemouth. This is one of the end-points for the 140-mile C2C (Sea to Sea) Ride which Sustrans says is the "UK’s most popular challenge cycle route." It is also the start point for Sustrans’ Reivers Route and the Coast and Castles Route as well as a number of coast to coast charity rides.

Mark Maitland owns the land where the centre was to be built. The former army helicoptor pilot trainer is from Tynemouth and is currently a flying instructor in the United Arab Emirates. His brother is an electrical engineer and director of a Tyneside electrical contracting firm. Reece also has a military background (he was a helicoptor pilot in the Army Air Corps, leaving with the rank of major) and is also based in the UAE, where he is an aviation consultant. Reece plans to return to the UK to help run the new business.

The C2C was opened in 1994 and starts in either Whitehaven or Workington, and ends in either Sunderland or Tynemouth.

Along with then-Sustrans CEO John Grimshaw the route was created by David Gray, now principal of adventure touring company Chain Events (which organises events on the C2C). Earlier this year he told BikeBiz that a full-on finishing point for the C2C was "long overdue."

Pointing to the successes of other businesses set up on the route, Gray added: "This could be an excellent focal point similar to Greystoke Cycle Cafe or Parkhead Station in Stanhope.

"The current finish at Tynemouth – a car park with a totem pole at the end – can be somewhat underwhelming. This would be a fitting end to a challenging ride, or a great start to one of the other rides that leave from that point. It would do nothing but good for the area, and is long overdue."